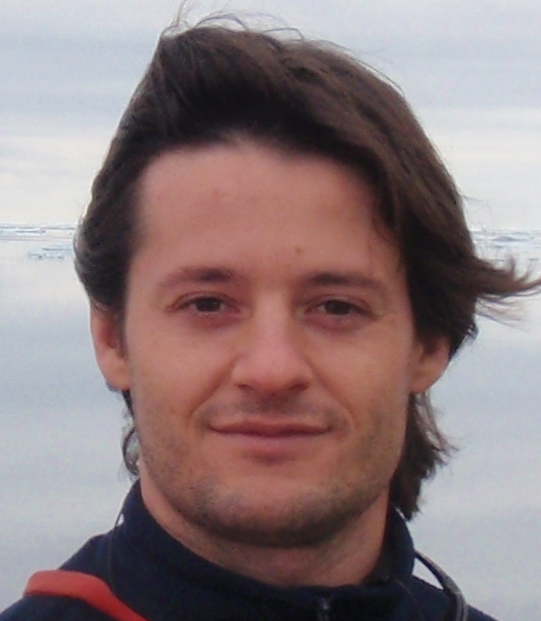 BIOGRAPHY: Pierre Dutrieux received his Ph.D in Oceanography from the University of Hawaii in 2009. His PhD work investigated tropical ocean circulation and dynamics with a particular focus on meso-scale eddy variability. Since then he directed his attention to the interaction between the oceans and the polar ice sheets, first at the British Antarctic Survey (until 2015), at the Polar Science Center, APL-UW, and now at LDEO.
Using pioneering autonomous platforms (Autosub 3) to roam under at least 300 m thick ice for tens of kilometers, his research demonstrated that warm waters >3° above the in situ freezing point reaches the grounding line (where the ice sheet comes afloat and eventually extends into an ice shelf) of Pine Island Glacier, in West Antarctica. This water efficiently melts the ice shelf, reduces its buttressing effect on the flow of grounded ice into the ocean, and is now shown to be a key driver of a wide-spread glacial acceleration and retreat in the Amundsen Sea, West Antarctica, with important contributions to sea level rise, the freshwater budget of the Southern Ocean and possible impacts on the global thermohaline circulation and local primary production.
Using autonomous platforms, ship-borne ocean observations, ground-based and airborne radar observations, satellite observations and numerical modelling, Pierre further demonstrated that in this setting glacial melt is strongly modulated in time by remote climatic sources, and that the spatial distribution of melt is complex, varying at meters to kilometers scales, and carving and interacting with intriguing landscapes under the ice.

Developing new observational tools and integrating new understanding into predictive models, Pierre continues his work to shed light on the processes controlling the oceanic melting of glacial ice and its implications for the climate system.