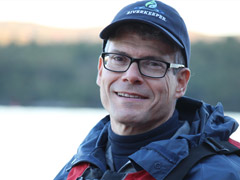 BIOGRAPHY: An attorney and educator, Paul has worked to promote the sustainability of human and natural communities since 1987, when he left the private practice of law and joined the New York State Attorney General’s environmental protection bureau.

In 1990, Paul began a ten-year stint at New York’s Department of Environmental Conservation, where he brought hundreds of corporate and government polluters to justice. Paul subsequently spent a decade in the land conservation movement before becoming president of Riverkeeper, New York's Clean Water Advocate, in 2010.

As Hudson Riverkeeper, Paul supports a staff of 30 and a network of thousands of volunteers who monitor local water quality and fight pollution in their communities. He helped trigger $3.4 billion in state funding for safe drinking water and water pollution control infrastructure; negotiated and signed a landmark agreement to close the Indian Point nuclear plant; and, partnered with groups across New York to win a statewide ban on natural gas hydrofracking.

"Doing less with less at EPA: Environmental enforcement has plummeted in the era of Trump. Here’s what we can do about it." American Bar Association Journal [online]. July/August 2019. https://www.americanbar.org/groups/environment_energy_resources/publications/trends/2018-2019/july-august-2019/doing-less-with-less/