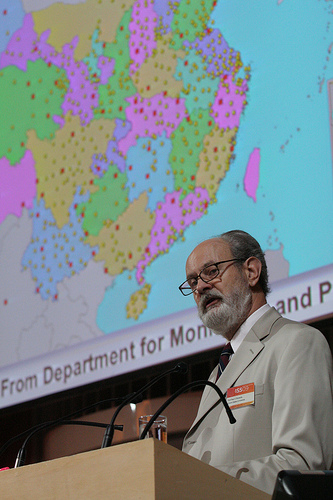 BIOGRAPHY: Paul Richards has taught at Columbia University since 1971, where he has conducted research on the theory of seismic wave propagation, the physics of earthquakes, the interior structure of the Earth, and the application of seismological methods to explosion and earthquake monitoring. He is a co-author of the advanced text “Quantitative Seismology” (available in Russian, Chinese, Japanese as well as English), and co-discoverer of evidence for super-rotation of the Earth’s inner core.  He has been emeritus Professor of Natural Sciences since 2008, and is currently Special Research Scientist at Columbia where he continues to conduct research on methods to improve the monitoring of earthquakes and explosions.

He has held Guggenheim and MacArthur Fellowships, chaired Columbia’s Department of Geological Sciences from 1979 to 1983, served terms as a visiting scholar at the U.S. Arms Control and Disarmament Agency in 1984 and 1993, was elected (1992) to membership in the Council on Foreign Relations, participated for the United States delegation in Geneva in CTBT negotiations, is a Fellow of the American Academy of Arts and Sciences. He received the Seismological Society of America’s 2009 medal for outstanding contributions in seismology. See http://www.ldeo.columbia.edu/~richards/PGRc.v.long.html for a list of publications, and http://www.ldeo.columbia.edu/~richards for other general information.