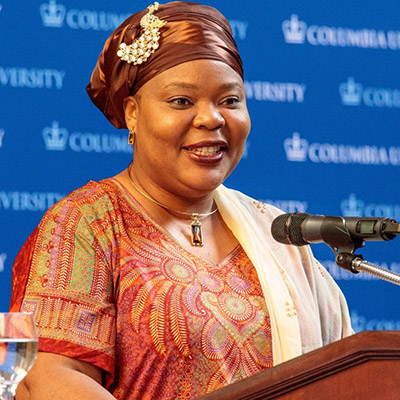 BIOGRAPHY: 2011 Nobel Peace Laureate Leymah Gbowee is a Liberian peace activist, trained social worker and women’s rights advocate. She currently serves as Executive Director of the Women, Peace, and Security program at the Earth Institute at Columbia University and is the founder and current President of the Gbowee Peace Foundation Africa, the founding head of the Liberia Reconciliation Initiative, and the co-founder and former Executive Director of Women Peace and Security Network Africa (WIPSEN-A). She is also a Founding Member and former Liberian Coordinator of Women in Peacebuilding Network/West Africa Network for Peacebuilding (WIPNET/WANEP).

She holds a M.A. in Conflict Transformation from Eastern Mennonite University (Harrisonburg, VA), and has received a number of honorary degrees. Ms. Gbowee advises numerous organizations working for peace, women’s rights, youth, and sustainable development, and has held distinguished fellowships at Barnard College and Union Theologi­cal Seminary. Ms. Gbowee serves as a Sustainable Development Goals Advocate for the United Nations and as a Member of the Aurora Prize Selection Committee, The World Refugee Council, The High-Level Task Force for the International Conference on Population and Development, The African Women Leaders Network for Reproductive Health and Family Planning. Ms. Gbowee has been named as one of the Top 100 Most Influential People in Gender Policy by Apolitical and one of the World’s 50 Greatest Leaders by Fortune Magazine. She has appeared on numerous television programs including CNN, BBC, and France24. Ms. Gbowee received the Women’s Refugee Council’s Voices of Courage Award in 2014. In 2016, Ms. Gbowee was awarded the Lifetime Africa Achievement Prize (LAAP) for Peace in Africa by the Millennium Excellence Foundation and in 2017, Ms. Gbowee was selected by the United Nations Secretary General to serve as a Member of United Nations Secretary-General’s High Level Advisory Board on Mediation. In 2018, Ms. Gbowee was appointed to the Gender Equality Advisory Council for Canada's G7 Presidency.