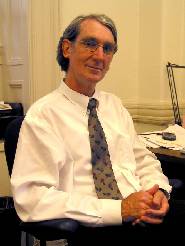 BIOGRAPHY: I am involved in three different but inter-related roles at Columbia.

1. I am a Professor in two departments at Columbia; The Department of Earth and Environmental Sciences and the Department of International and Public Affairs, the latter being the more recent. I teach and advise at two distinctly different levels. I co-teach with Ruth DeFries a course titled "Science for sustainable development" which is required for students majoring or concentrating in sustainable development at an undergraduate.
In that course I am able to teach about the Earth's complex dynamic systems like earthquakes and climate variations such as El Nino to very bright undergraduates who have had little exposure to Earth Sciences - they are bright about something else (Art History maybe). I find it a challenge and a joy. I also occasionally teach a graduate level course in Marine Seismology where we learn how seismic energy can be used to learn about the interior of the Earth. In my role with the School of International and Public Affairs I am the Associate Director and director of graduate studies for the PhD Program in Sustainable Development that had its first intake of six students in Fall 2004. This program provides PhD training in the intensely cross-discipline area of sustainable development with themes ranging from the economics of natural resource management to ecological preservation and its interaction with economic development. I advise all the students on their natural science needs for the studies. I also created and teach with a group of faculty colleagues a course titled Environmental Science for Susatainable Devlopment that is a core requirement for the PhD students. It is open to Masters students as well. Finally, I teach Disasters and development with a Sri Lankan colleague, Sonali Deraniyagala who is an economist.

2. I do research and that too falls into two categories. At the Lamont-Doherty Earth Observatory I have, since my PhD training, studied the continental margins, oceanic crust and mid-ocean ridge tectonic evolution using geophysical methods, primarily marine reflection seismology. My early research interests included the study of physical mechanisms and processes associated with seafloor spreading, continental extension and the development of passive continental margins. Initial studies focused on rifting and volcanism in the Norwegian-Greenland Sea. I continued those research thrusts with studies of active rifting in the Woodlark Basin off Papua New Guinea, as well as his other work on complex system dynamics. More recently he has turned my attention to the vexing issue of the role of Earth systems in sustainable development. I have used my expertise in the behavior of these systems, and the inherent limits to their predictability as the basis for studying science-based issues of sustainable development. Currently, I am focusing on understanding how scientific advances made in developed countries can be used to elevate the condition of people in developing countries. I am especially interested in the way in which natural systems interact with human well-being. We know very well that the world's poorest people suffer disproportionately from natural disasters but it seems that it is possible to extend that obvious impact to an entire range of natural effects, not all of which are geophysically extreme. It seems very plausible that vulnerability to natural variations and changes at all scales and magnitudes presents a barrier to human development (see EOS recent article in Publications).


3. I have responsibility for several activities for the Earth Institute and until July 2007 was Deputy Director to Jeff Sachs. The Institute is taking a comprehensive approach to understanding to nexus between the Earth's environment and the nature of the human condition. It is probably no accident that most of the world's poor people live in arid or tropical environments and suffer more from variations in natural conditions than those in the temperate zones. Perhaps an enhanced understanding of the relationship between the natural systems and human development can be used to improve the condition of the world's poor and for the lives of all. This is a undertaking of humbling dimension and scope and I am working to apply my experience as a science manager (two terms as Interim Director at Lamont as well as its Executive Deputy Director) to this daunting but critical problem. For the Earth Institute I direct the post-doctoral Fellows Program. This program brings early career researchers from around the world to the Institute to study diverse issues in sustainable development. I am also advancing programs of research, education and practice in the area of natural disasters and sustainable development which aims to understand the role that such disasters play in determining the development pathway for impacted countries. I have also made a special study of the mortality from Hurricane Katrina and developed a unique web tool to gather information on deceased victims www.katrinalist.columbia. Additionally i worked with Realizing Rights: The Ethical Globalization Initiative www.realizingrights.org on bringing rights-based approaches to development in the Millennium Village project of the Institute millennium villages and with the International Council on Human Rights Policy ICHRP on issues of Climate Change and human rights, These projects in human rights are new ventures for me and i look forward to advancing them in the future. Finally, though this is not really research per se, with a Lamont colleague David Ho, and Craig Calfee who is a bicycle designer and builder from California, we are introducing to west Africa the idea of cargo bicycles made with bamboo frame sections because they can be made to suite local needs, from local materials and do not require significant infrastructure to build: see BambooBike

I received a B.Sc in Physics and Pure Mathematics from the University of Melbourne, Australia, an M.Sc in Geophysics from the University of Sydney, Australia, and a Ph.D. in Marine Geophysics from Columbia University. I was born in Melbourne, and am an Australian citizen and U.S. citizen.
I have authored or co-authored more than 80 articles in scientific journals and many popular articles. Fieldwork includes over three years at sea on research 30 cruises aboard Columbia's vessels and others in all parts of the world's oceans, crossing the equator, the Arctic Circle and Antarctic Circle.

I have five children, three girls and two boys. And they are all wonderful.

LATEST IN THE MEDIA