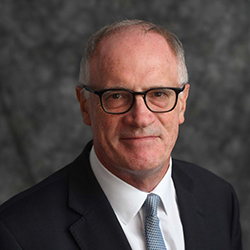 BIOGRAPHY: Alex N. Halliday is the Director of Columbia University’s Earth Institute. He joined the Earth Institute in April 2018, after spending more than a decade at the University of Oxford, during which time he was dean of science and engineering.

With over 400 published research papers, Halliday has been a pioneer in developing mass spectrometry to measure small isotopic variations in everything from meteorites to seawater to living organisms, helping to shed light on the birth and early development of our solar system, the interior workings of the Earth, and the processes that affect Earth’s surface environment.

His scientific achievements have been recognized through numerous awards, including the Murchison Medal of the Geological Society, the Bowen Award and Hess Medal of the American Geophysical Union, the Urey Medal of the European Association of Geochemistry, and the Oxburgh Medal of the Institute of Measurement and Control. He is a Fellow of the UK’s Royal Society and Foreign Associate of the US National Academy of Sciences. He was Knighted in the UK for services to science and innovation by Her Majesty the Queen.

Halliday has also helped to lead a variety of distinguished scientific societies and advisory panels. He is the former Vice President of the Royal Society and former President of the Geochemical Society. He has served as an external board member for Britain’s Natural Environment Research Council, the Max Planck Society, London’s Natural History Museum, the American Geophysical Union, and more.

As a professor in Columbia’s Department of Earth and Environmental Sciences, Halliday divides his time between Columbia’s Morningside campus and his geochemistry lab at Lamont-Doherty Earth Observatory.

Climate change, with its rising temperatures and rising sea levels, its wildfires and extreme weather events, is a profound threat to much of the life on this planet, including human life. And yet we are not taking anything close to the steps necessary to mitigate this existential challenge. Bob explores some of the hard truths about climate change with his guest - one of the wisest minds on this issue - Alex Halliday, director of the Earth Institute, Columbia University.