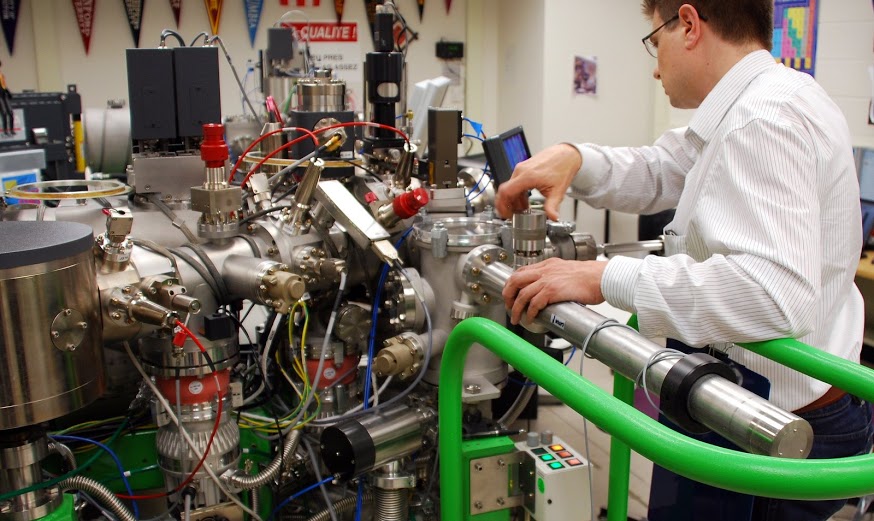 DESCRIPTION: Model predictions and long-range forecasts for future climate change are partly based on studies of geologic records of past global warming events. One such global warming event occurred ~55.8 million years ago and is referred to as the Paleocene-Eocene thermal maximum (PETM). Study of geologic records around the world has shown that surface temperatures warmed 5-8°C, biochemical processes were altered, and the global biosphere was profoundly perturbed during this time. However, the most distinctive hallmark of the PETM is a precipitous decrease in the stable carbon isotope (13C/12C) ratios of terrestrial and marine carbon-bearing materials. This carbon isotope excursion (CIE) has been documented at numerous locations across the globe, and its ubiquity signals the rapid release of massive quantities of isotopically light carbon (12C) into the ocean-atmosphere system. The source of this carbon is still debated, but the most parsimonious explanation invokes the dissociation of massive quantities of sedimentary methane hydrate along continental slopes. The fact that this ancient global warming event is closely linked to a major perturbation to the global carbon cycle uniquely qualifies the PETM as an analogue for future climate change driven by current societal practices.

A key piece of evidence for estimating the amount of carbon emitted during the PETM is the magnitude of the CIE, yet it has long been recognized that different carbon-bearing substrates yield different CIE magnitudes. For example, the CIE reported from terrestrial records (soil nodules and land plant remains) is about twice as large as indicated by measurements of marine sediments. This discrepancy is vexing because gases are readily exchanged across the air-sea interface so that the physiochemical state of the surface ocean should equilibrate with the atmosphere on time scales virtually instantaneous by geologic standards. Hence, the magnitude of the CIE in terrestrial and surface-ocean records should be similar, yet this is not borne out by published records.

The vast majority of marine PETM records are derived from the stable isotopic compositions of tiny (<1 mm) calcite shells grown by planktic foraminifera, an extant group of amoeboid protists with a rich fossil record. The preponderance of planktic foraminiferal shells in deep-sea sediments has made them a preferred substrate for studies using geochemical analyses to reconstruct past ocean/climate change. However, a problem plaguing such records is that post-depositional processes on the seafloor can alter the original chemical compositions of foraminiferal shells, thereby biasing stable isotope records used to reconstruct past climate conditions like those that prevailed during the PETM

At the Wisconsin Secondary Ion Mass Spectrometer (WiscSIMS) laboratory, novel in situ techniques have been developed for measuring stable isotope ratios in tiny (~10 micrometers) targets in calcite samples. This approach permits the identification and analysis of subdomains inside foraminiferal shells that are less affected by chemical alteration and therefore provide a more accurate record of past climatic conditions. Currently, these stable isotope measurements cannot be performed by any other technique. First results from a pilot study indicate that the CIE magnitude recorded within these well-preserved subdomains in planktic foraminiferal shells is actually twice as high as previously reported and thus highly congruous with the CIE magnitude in terrestrial records. This project focuses on obtaining a more accurate measurement of the CIE magnitude. Determining the true magnitude of the CIE is important because it will (1) better constrain the amount of carbon emitted, (2) provide a more realistic testing ground for assessing the viability of proposed sources of the carbon input, (3) improve our ability to gauge climate sensitivity to greenhouse gas forcing, (4) help identify feedback mechanisms within the climate system that either amplify or attenuate global warming, and (5) make it possible to better calibrate biotic (terrestrial and marine) responses to environmental change driven by rapid carbon input. This project will benefit the graduate education of a young female scientist, and provide infrastructure support for the WiscSIMS laboratory where transformative, cutting-edge analytical technologies are being developed.

(Pictured above: The CAMECA IMS-1280 Secondary Ion Mass Spectrometer housed in the WiscSIMS lab, Department of Geoscience, University of Wisconsin-Madison.)

OUTCOMES: SIMS-based in situ measurements of d13C in minute (7 um) domains of planktic foraminifer shells (ODP Site 865, central Pacific Ocean) yield a CIE that is ~2‰ larger than that delineated by conventional ‘whole-shell’ d13C values for this same PETM record.

Modeling and Adapting to Future Climate

Collaborative Research: Timing and Structure of the Last Glacial Maximum and Termination in Southern Peru: Implications for the Role of the Tropics in Climate Change