Vikings May Not Have Colonized Greenland in Nice Weather 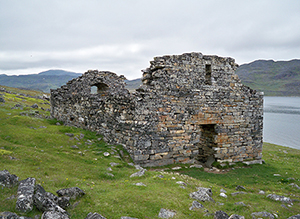 Vikings colonized Greenland and possibly neighboring Baffin Island during what has been assumed to be—perhaps mistakenly--a temporary warm period. They disappeared in the 1400s. Southern Greenland’s Hvalsey church is the best preserved Viking ruin. (Wikimedia Commons)

A new study questions the popular notion that 10th-century Norse people were able to colonize Greenland because of a period of unusually warm weather. Based upon signs left by old glaciers, researchers say the climate was already cold when the Norse arrived—and that climate thus probably played little role in their mysterious demise some 400 years later. On a larger scale, the study adds to building evidence that the so-called Medieval Warm Period, when Europe enjoyed exceptionally clement weather, did not necessarily extend to other parts of the world.

“It’s becoming clearer that the Medieval Warm Period was patchy, not global,” said lead author Nicolás Young, a glacial geologist at Columbia University’s Lamont-Doherty Earth Observatory. “The concept is Eurocentric—that’s where the best-known observations were made. Elsewhere, the climate might not have been the same.” Climate scientists have cited the Medieval Warm Period to explain anomalies in rainfall and temperature in far-flung regions, from the U.S. Southwest to China. The study appears today in the journal Science Advances.

Norse, or Vikings, led by Erik the Red, first sailed from recently settled Iceland to southwestern Greenland around 985, according to Icelandic records. Some 3,000 to 5,000 settlers eventually lived in Greenland, harvesting walrus ivory and raising livestock. But the colonies disappeared between about 1360 and 1460, leaving only ruins, and a longstanding mystery as to what happened. The native Inuit remained, but Europeans did not re-inhabit Greenland until the 1700s. 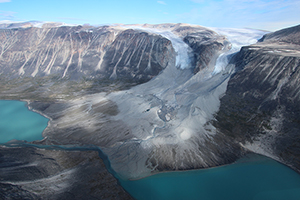 Glaciers usually advance during cold times and recede during warm ones. These two in western Greenland are now retreating from where they may have been when the Vikings arrived. (Jason Briner)

The Greenlandic Vikings’ apogee coincided with the Medieval Warm Period (also known as the Medieval Climate Anomaly), generally dated from about 950-1250; their disappearance followed the onset of the Little Ice Age, which ran from about 1300-1850. Both periods are firmly documented in European and Icelandic historical records. Thus, popular authors and some scientists have fixed on the idea that nice weather drew the settlers to Greenland, and bad weather froze and starved them. But there are no early historical climate records from Greenland. Recently, historians have proposed more complex factors in addition to, or instead of, climate: hostilities with the Inuit, a decline in ivory trade, soil erosion caused by the Vikings’ imported cattle, or a migration back to Europe to farms depopulated by the Black Plague.

In the new study, the scientists sampled boulders left by advancing glaciers over the last 1,000-some years in southwest Greenland, and on neighboring Baffin Island, which the Norse may also have occupied, according to newly uncovered evidence.  Glacial advances during the Little Ice Age have wiped out most evidence of where the glaciers were during the Norse settlement. But Young and his colleagues were able to find traces of a few moraines—heaps of debris left at glaciers’ ends—that, by their layout, they could tell predated the Little Ice Age advances. Using newly precise methods of analyzing chemical isotopes in the rocks, they showed that these moraines had been deposited during the Viking occupation, and that the glaciers had neared or reached their later maximum Little Ice Age positions between 975 and 1275.  The strong implication: it was at least as cold when the Vikings arrived as when they left. “If the Vikings traveled to Greenland when it was cool, it’s a stretch to say deteriorating climate drove them out,” said Young.

The findings fit with other recently developed evidence that the effects of the Medieval Warm Period were not uniform; some places, including parts of central Eurasia and northwestern North America, may actually have cooled off.

In western Greenland, small outlet glaciers are wasting backward, leaving behind piles of rocks, or moraines, that mark their previous advances. Meltwater has formed a lake. (Jason Briner)

In the Atlantic region, the research includes a 2013 study of ocean-bottom sediments suggesting that temperatures in the western North Atlantic actually went down as the eastern North Atlantic warmed. Other studies of the region suggest a more complex picture. A 2011 study of a core from the Greenland ice sheet shows a strong cooling at the start of Norse occupation, and another in the middle, with interspersed warming. On the other hand, lake-bottom sediments from southwestern Greenland studied in 2011 by Lamont-Doherty paleoclimatologist  William D’Andrea, suggest it might indeed have been warm when the Norse arrived, but that climate cooled starting in 1160, well before the Little Ice Age.

The new study may feed recent suggestions by other researchers that the Medieval Warm Period was in part just an extended phase of the North Atlantic Oscillation (NAO). Modern observations show that the NAO is a generally decadal-scale climate cycle, in which warm winds from the west strengthen and boost temperatures in Europe and Iceland, but simultaneously make southwest Greenland and Baffin Island colder, by sucking in more Arctic air. That makes the two regions seesaw in opposite directions. 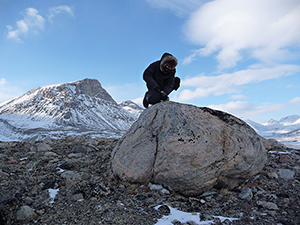 Gifford Miller, a paleoclimatologist at the University of Colorado, called the paper “a coup de grace on the Medieval Warm Period.” Miller said it shows “with great clarity of evidence” that “the idea of a consistently warm Medieval period is certainly an oversimplification and of little utility.”

Astrid Ogilvie, a climate historian at Iceland’s Stefansson Arctic Institute and the University of Colorado’s Institute for Arctic and Alpine Research, said the study “shows that the climate is clearly more complicated and variable than people earlier assumed.”  As for the Vikings, the climate story has been dimming for some time, she said. “I do not like the simplistic argument that the Greenland people went there when it was warm, and then ‘it got cold and they died’,” she said. “I think the Medieval Warm Period has been built on many false premises, but it still clings to the popular imagination.”

The rocks were analyzed at the University at Buffalo, and at the Lamont-Doherty lab of geochemist and study coauthor Joerg Schaefer. The Lamont lab is among a handful that can precisely date such recent rock deposits. The analyses are done by measuring buildups of small amounts of Beryllium 10, an isotope created when cosmogenic rays strike rock surfaces newly exposed by melting ice.

In addition to Young and Schaefer, the paper was coauthored by Avriel Schweinsberg and Jason Briner of the University at Buffalo, who carried out the Greenland portion of the fieldwork.