Study Warns of Unprecedented Risk of Drought in 21st Century 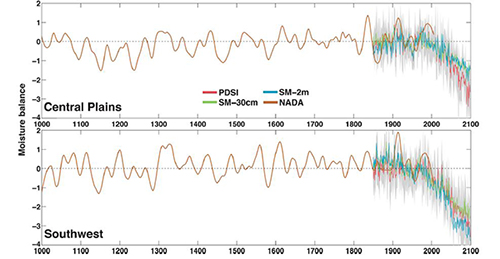 A representation of the summer moisture in the U.S. Central Plains and Southwest. The brown line represents the variation in dryness since the year 1000, based on data from the North American Drought Atlas; the lower the line on the graph, the drier the conditions. Colored lines to the right side of the graph represent what climate models see ahead: a trend toward dryness not seen in the previous millennium. Credit: Cook et al., Science Advances, 2005

During the second half of the 21st century, the U.S. Southwest and Great Plains will face persistent drought worse than anything seen in times ancient or modern, with the drying conditions “driven primarily” by human-induced global warming, a new study predicts.

The research says the drying would surpass in severity any of the decades-long “megadroughts” that occurred much earlier during the past 1,000 years—one of which has been tied by some researchers to the decline of the Anasazi or Ancient Pueblo Peoples in the Colorado Plateau in the late 13th century. Many studies have already predicted that the Southwest could dry due to global warming, but this is the first to say that such drying could exceed the worst conditions of the distant past. The impacts today would be devastating, given the region’s much larger population and use of resources.

“We are the first to do this kind of quantitative comparison between the projections and the distant past, and the story is a bit bleak,” said Jason E. Smerdon, a co-author and climate scientist at the Lamont-Doherty Earth Observatory, part of the Earth Institute at Columbia University. “Even when selecting for the worst megadrought-dominated period, the 21st century projections make the megadroughts seem like quaint walks through the Garden of Eden.”

“The surprising thing to us was really how consistent the response was over these regions, nearly regardless of what model we used or what soil moisture metric we looked at,” said lead author Benjamin I. Cook of the NASA Goddard Institute for Space Studies and the Lamont-Doherty Earth Observatory. “It all showed this really, really significant drying.”

The new study, “Unprecedented 21st-Century Drought Risk in the American Southwest and Central Plains,” will be featured in the inaugural edition of the new online journal Science Advances, produced by the American Association for the Advancement of Science, which also publishes the leading journal Science.

Today, 11 of the past 14 years have been drought years in much of the American West, including California, Nevada, New Mexico and Arizona and across the Southern Plains to Texas and Oklahoma, according to the U.S. Drought Monitor, a collaboration of U.S. government agencies.

The current drought directly affects more than 64 million people in the Southwest and Southern Plains, according to NASA, and many more are indirectly affected because of the impacts on agricultural regions.

Shrinking water supplies have forced western states to impose water use restrictions; aquifers are being drawn down to unsustainable levels, and major surface reservoirs such as Lake Mead and Lake Powell are at historically low levels. This winter’s snowpack in the Sierras, a major water source for Los Angeles and other cities, is less than a quarter of what authorities call a “normal” level, according to a February report from the Los Angeles Department of Water and Power. California water officials last year cut off the flow of water from the northern part of the state to the south, forcing farmers in the Central Valley to leave hundreds of thousands of acres unplanted.

“Changes in precipitation, temperature and drought, and the consequences it has for our society—which is critically dependent on our freshwater resources for food, electricity and industry—are likely to be the most immediate climate impacts we experience as a result of greenhouse gas emissions,” said Kevin Anchukaitis, a climate researcher at the Woods Hole Oceanographic Institution. Anchukaitis said the findings “require us to think rather immediately about how we could and would adapt.”

Much of our knowledge about past droughts comes from extensive study of tree rings conducted by Lamont-Doherty scientist Edward Cook (Benjamin’s father) and others, who in 2009 created the North American Drought Atlas. The atlas recreates the history of drought over the previous 2,005 years, based on hundreds of tree-ring chronologies, gleaned in turn from tens of thousands of tree samples across the United States, Mexico and parts of Canada.

For the current study, researchers used data from the atlas to represent past climate, and applied three different measures for drought—two soil moisture measurements at varying depths, and a version of the Palmer Drought Severity Index, which gauges precipitation and evaporation and transpiration—the net input of water into the land. While some have questioned how accurately the Palmer drought index truly reflects soil moisture, the researchers found it matched well with other measures, and that it “provides a bridge between the [climate] models and drought in observations,” Cook said.

The researchers applied 17 different climate models to analyze the future impact of rising average temperatures on the regions. And, they compared two different global warming scenarios—one with “business as usual,” projecting a continued rise in emissions of the greenhouse gases that contribute to global warming; and a second scenario in which emissions are moderated.

By most of those measures, they came to the same conclusions.

“The results … are extremely unfavorable for the continuation of agricultural and water resource management as they are currently practiced in the Great Plains and southwestern United States,” said David Stahle, professor in the Department of Geosciences at the University of Arkansas and director of the Tree-Ring Laboratory there. Stahle was not involved in the study, though he worked on the North American Drought Atlas.

Smerdon said he and his colleagues are confident in their results. The effects of CO2 on higher average temperature and the subsequent connection to drying in the Southwest and Great Plains emerge as a “strong signal” across the majority of the models, regardless of the drought metrics that are used, he said. And, he added, they are consistent with many previous studies.

Anchukaitis said the paper “provides an elegant and convincing connection” between reconstructions of past climate and the models pointing to the risk of future drought.

Toby R. Ault of Cornell University is a co-author of the study. Funding was provided by the NASA Modeling, Analysis and Prediction Program, NASA Strategic Science, and the U.S. National Science Foundation.

Other recent papers and related stories:

For more on climate impacts on the U.S. Southwest, visit the Environmental Protection Agency’s webpage on the topic, here.