New Light on a Neglected Threat to Health, Child Development

Naturally occurring arsenic in private wells threatens people in many U.S. states and parts of Canada, according to a package of a dozen scientific papers to be published next week. The studies, focused mainly on New England but applicable elsewhere, say private wells present continuing risks due to almost nonexistent regulation in most states, homeowner inaction and inadequate mitigation measures. The reports also shed new light on the geologic mechanisms behind the contamination. The studies come amid new evidence that even low doses of arsenic may reduce IQ in children, in addition to well documented risks of heart disease, cancer and reduced lung function. The reports comprise a special section in the journal Science of the Total Environment. 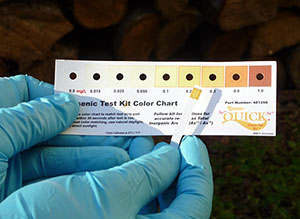 Millions may be exposed to private well water that tests above federal safety limits for arsenic. Here, a field test in central Maine shows one homeowner's well has a high level. (Robert Marvinney, Maine Geological Survey)

"Arsenic is the biggest public-health problem for water in the United States—it's the most toxic thing we drink," said geochemist Yan Zheng, an adjunct research scientist at Columbia University's Lamont-Doherty Earth Observatory who coedited the special section and coauthored some of the articles. "For some reason, we pay far less attention to it than we do to lesser problems." Much long-term work on arsenic in the United States and southeast Asia has been done via an extensive program at Lamont-Doherty and Columbia's Mailman School of Public Health.

Many rocks and sediments have inert, harmless traces of arsenic locked into them. But in recent years geologists have observed that some geologic formations can become enriched in arsenic, and certain chemical conditions may cause rocks to react with groundwater and liberate the element into aquifers. Since the 1990s, the problem has been identified in some 70 countries; it is worst in southeast Asia, where as many as 100 million people are exposed.

Largely unregulated private wells serve some 43 million Americans; previous work by the U.S. Geological Survey indicates that 6.8 percent tested nationwide violate federal standards governing arsenic in public water supplies. This could be interpreted to mean that some 3 million people are affected; but USGS hydrologist Joseph Ayotte, the special section's other coeditor, says the distribution of high arsenic levels is spotty, so it is hard to extract a reliable number. Maps show hot spots in many states, with patches breaking out not only through New England, but the Great Lakes, and from the Pacific Northwest and California, across the western states into Texas. Twenty percent of wells in eastern New England are above limits, affecting some 80,000 people in Maine alone, where the contamination rate in the central part of the state is 45 percent. In 2001, the U.S Environmental Protection Agency lowered the permissible standard from 50 parts per billion down to 10.

Public water supplies serving more than 25 people are supposed to meet that standard, and most do—some, by filtering water if necessary. But according to a 2014 study done in part by the Columbia Water Center, 500 mostly small rural public utilities are still in violation, mainly due to cost.

Private wells are almost certainly a much greater problem in terms of the number of people exposed. The researchers did much of their work in Maine, where half the population relies on private wells. Unlike the public utilities, these remain completely unregulated, and often untested for arsenic. In one study, the researchers found that 41 percent of well owners in a 17-town study area of central Maine had never had their wells tested—and of those who did, many did not remember the results. Based on this and other data, the authors estimated that nearly a third of the people in the study area could be exposed to levels above the federal standard. 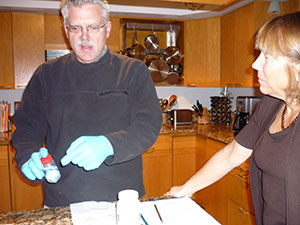 As part of the work, a study led by Lamont-Doherty researcher Sara Flanagan surveyed a subgroup of homeowners who remembered being notified three to seven years earlier that their wells were tainted. Among them, 43 percent had since installed filtration systems, and 30 percent had taken other measures such as drinking bottled water. But the other 27 percent had done nothing. The study says that many people tended to be too optimistic, underestimating their own risk compared with their neighbors'. Another study of an arsenic-affected area in Nova Scotia, led by Dalhousie University, also found that people were unjustifiably confident that their well was safe.

"People say, 'I'm not going to worry about it—maybe I'll get cancer, maybe I won't," said pharmacologist Joseph Graziano, a leading arsenic expert and Earth Institute professor at Mailman who oversees Columbia's work on the issue. "For [local and state] government, it's a hardy perennial—once in a while it gets some press, there's a little shuffle of activity, then it dies again until the next study comes out."

In the Maine study area, the research showed that even when households did install filtration systems, 15 percent failed to produce water meeting the EPA standard. A separate study in the package, done by researchers from Rutgers University in an arsenic-plagued part of New Jersey, reported that filters treating water only at the kitchen sink are less effective at reducing exposure than systems that treat a home's entire water intake. But reduced exposure comes at a cost: whole-house systems cost an average of $2,740 to install, while faucet filters average $365. 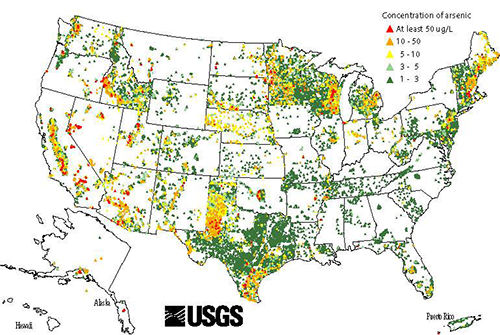 Hot spots of dangerously high arsenic content (yellows to reds) can be found in many states. Greens show somewhat lower levels, but some health authorities say no level may be completely safe. (U.S. Geological Survey)

The 10-parts-per-billion federal standard itself could be deficient. Risks of heart disease and lung, skin and bladder cancers are well documented above such levels, but a study last year of three Maine school districts by a related team of Columbia researchers found that even subtler traces—5 parts per billion--took 5 or 6 points off the IQs of children who were studied. Maine state officials say that 20 percent of the state's wells may violate this lower level. "The risk for pregnant women and children is much higher. We're hoping that recognition may be a turning point in getting more action," said Graziano. New Jersey, one of the few states to have any regulations regarding arsenic, has already lowered its limit to 5 parts per billion.

A half dozen of the new studies examine geologic factors that introduce arsenic into wells. But in Maine, Vermont, New Hampshire and neighboring states, many penetrate so-called low-grade metamorphic rocks such as slate and phyllite. These form when sedimentary rocks such as shale are squeezed and heated just a bit more—a process that tends to form minerals rich in arsenic, the studies find. Groundwater high in organic matter and low in oxygen may then react with such rocks to dissolve the poison; certain poorly known microbial communities may also play a role. According to one study of Maine wells, led by Lamont-Doherty scientist Qiang Yang, undissolved particles of arsenic-rich iron minerals may be swept through fissures and sucked up—possibly one of the major pathways of arsenic transport in this kind of aquifers, said Yang. In other parts of the country, tainted wells draw water not from fractured bedrock, but from deep jumbles of rocky debris and sediment left behind by retreating glaciers; the hydrology may work differently in these regions. Another study in the package by researchers at Lehigh University found that in parts of New Jersey and Pennsylvania, highly alkaline water was more apt to take up arsenic.

Zheng (also a professor at City University of New York) said such findings will help geologists draw better maps of hazardous areas. But, she said, underground terrain can vary so much, individual tests are the only way to know about a particular well.

In conjunction with the Maine Geological Survey and Maine Center for Disease Control and Prevention, the Columbia team is now embarking on a project to test ways to motivate well owners in one county to test their water. Maine legislators are also considering a law requiring that a well be tested whenever a house is sold.

Much of the work in the special issue was funded by the U.S. National Institute of Environmental Health Sciences Superfund Research Program. Other study authors came from Middlebury College, the Vermont Geological Survey, Castleton State College, University of San Diego, the University of Ottawa, and the Nova Scotia Department of Natural Resources.