Volcanoes can have multiple personalities, peaceful one minute, explosive the next. A geologist who has untangled these complicated states on land and at sea, improving our ability to see deadly eruptions coming, will receive the 2015 Vetlesen Prize. Stephen Sparks, a volcanologist at the University of Bristol, will be awarded a medal and $250,000 at a ceremony in New York in June. Considered the Nobel Prize of the earth sciences, the Vetlesen Prize is supported by the G. Unger Vetlesen Foundation and administered by Lamont-Doherty Earth Observatory at Columbia University. 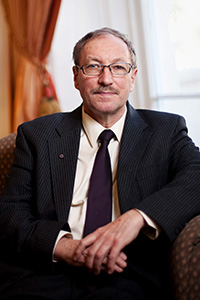 As a graduate student in the 1970s, Sparks became one of the first to apply math and physics to the interpretation of volcanic deposits in the field, bringing volcanology into the modern era. His methodical, collaborative approach has produced a long list of discoveries that have improved our practical understanding of volcanic hazards globally.

Born near London and raised in the city of Chester, Sparks developed an early interest in rocks exploring the caves and crags of the British countryside. He studied geology at Imperial College in London; an expedition that first summer mapping volcanic rocks in southern Iceland sealed his interest in volcanoes.

After finishing his PhD in 1974, Sparks worked with colleagues to model eruptive processes during stints at Lancaster University in Britain and the University of Rhode Island. In a 1977 study in Nature, he showed how magma deep within the earth could mix with material closer to the surface to trigger an explosive eruption. Working with physicist Lionel Wilson, he explained how explosions sometimes shoot ash high into the stratosphere, but at other times unleash deadly flows of ash and gas down the flanks of volcanoes.  He went on to show in Icelandic volcanoes that the sideways flow of magma could cause the spectacular collapse of a caldera up to 40 miles away. Off the coast of Greece, his analysis of deep-sea volcanic rocks added support for the idea that the Thera eruption around 1500 BC may have influenced the fall of the ancient Minoans on the island of Crete. 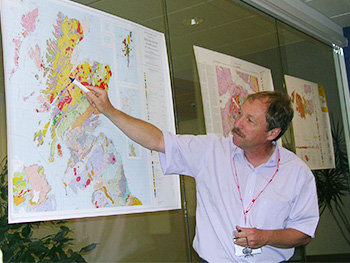 Though Britain has no active volcanoes, it does have ancient ones. Here, Stephen Sparks points to a few in the Scottish Highlands. (courtesy of Stephen Sparks)

In 1978, Sparks moved to Cambridge University, where he published a series of influential papers with mathematician Herbert Huppert on the physics of magma chambers beneath volcanoes. In lab experiments, they demonstrated how heavy magma can become unstable and, counterintuitively, rise. In 1989, amid a restructuring of Britain’s research universities, Sparks and geochemist Bernie Wood were tapped to lead Bristol University’s geology department. There, in a country with no volcanoes of its own, they built one of the world’s leading centers for volcanology and the earth sciences.

When Montserrat’s Soufrière Hills volcano came to life in 1995, Sparks was picked to head monitoring efforts there and advise the government. Ongoing research has led to a better understanding of pyroclastic flows--rapid exhalations of gas, ash and rock dished out by explosive volcanoes like Soufrière Hills and its neighbor, Mount Pelée on Martinique, whose 1902 eruption killed 30,000 people. Drawing on data from Soufrière Hills, Sparks helped to show in a 1999 study in Nature how small pressure variations in a volcano’s magma chamber, or in the stickiness of its magma, can create wild mood swings, turning a gently oozing eruption into something explosive. He also pioneered methods for assessing the danger posed by active volcanic eruptions, helping governments to improve decisions about evacuations and rebuilding. Thanks in part to Sparks’s work, the eruptions on Montserrat are now taught in British schools.

More recently, in a 2006 study in the Journal of Petrology, Sparks helped model the evolution of earth’s crust in deep “hot zones” where chemically altered magmas drive volcanism. He has partnered with the mining company BHP Billiton in Chile and DeBeers in South Africa to learn more about the volcanic processes that produce copper and diamond deposits. He has also assessed the safety of old volcanic rocks in Britain, Japan and the United States for storing radioactive waste. He has coordinated a global assessment of volcanic risk for the United Nations. 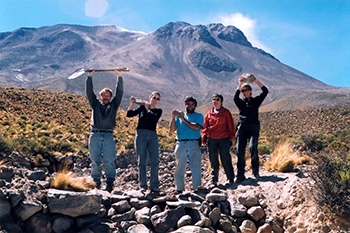 To make it up Ollague Volcano on a 2003 expedition to Chile, Sparks (left) and his research team stopped to complete some needed road repairs. (courtesy of Stephen Sparks)

Elected to the Royal Society at the early age of 38, he is among the top-cited volcanologists ever. An enthusiasm to share his knowledge has led to frequent appearances on TV and in print. Colleagues remark on his collegiality. “Everyone has an egotism that drives their research, but Steve never lets it get in the way of working with others,” said Barry Voight, a volcanologist at Penn State. “You know he’s not going to pick your brain and run off with your ideas. Instead, he will often improve on them.”

Since the Vetlesen Prize was first awarded in 1959, recipients have included geologist J. Tuzo Wilson, a key force in developing the theory of plate tectonics; oceanographer Walter Munk, whose work has shaped our understanding of tides, waves, and ocean mixing; astronomer Jan Oort, who elucidated the architecture of galaxies and the outer solar system; geochemist Wallace Broecker, a father of modern climate science; and geologist Walter Alvarez, who connected the extinction of the dinosaurs to an asteroid impact.