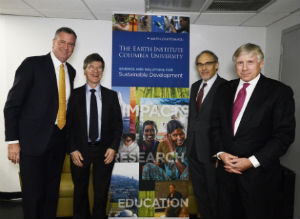 NEW YORK, Nov. 25 — More than a hundred academics, policymakers, and practitioners in education, social services and health came together today at Columbia University to discuss the well-being of New York City's children and offer specific recommendations to help every child reach his or her full potential.

“The NYC Summit on Children," organized by the Earth Institute at Columbia University, sought to highlight issues around the life-long value of early childhood development support and pre-kindergarten education.  Access to these critical interventions is especially problematic for New York’s most economically disadvantaged families.

The Summit comes as the City prepares for the new administration of Mayor-elect Bill de Blasio. A wide range of expert participants emphasized and supported key parts of the Mayor-elect’s policy platform, including his call for universal pre-kindergarten education and increased availability of quality after-school programs.

“I today stand before you ready to mount a strong consistent fight for the things that will make a difference,” said Mayor-elect de Blasio, “and that means free high quality, full day pre-k for every child in New York City. And it means after-school free programming for every middle school child in this city to reinforce that level of education that’s so often ignored, that crucial transcendent moment in every child's education.”

“To do this we will need dedicated resources, not those that get lost in budget battles but a dedicated revenue stream,” he said. “I proposed over a year ago a tax on those who make over half a million or more over the next five years. It is a small addition to their local taxation. It will make a huge difference in the lives of our children, a transformational difference. It will be an investment that we will feel the positive result of for years and decades to come, if we get it right.“

"We are proud to welcome Mayor-elect de Blasio back to campus where he earned his graduate degree in Public Affairs," said Columbia University President Lee C. Bollinger.  "As he knows first-hand, Columbia has a deep tradition of active engagement in the great issues of our time.  And given the challenges our society faces here in New York and around the world—from climate change to income inequality—it’s never been more profoundly important for our great research universities to commit both our intellectual capacity and our convening power to the search for solutions as we are doing here today."

The first panel of the conference, moderated by Bob Herbert, distinguished Senior Fellow at Demos and former NY Times columnist, looked at the current state of children’s well-being and NYC’s education system from several vantage points: the effects of poverty; access to health care and nutrition; challenges at the community level; and meeting the educational needs of young children.

The second panel, moderated by broadcast journalist and author Jane Pauley, underscored the data that shows the life-long negative consequences of failing to ensure that children are truly ready to start school and perform effectively in the classroom.

The last discussion was led by Brian Lehrer of WNYC and looked at opportunities the Mayor-elect will have to move forward and make sure that disparities are eliminated and that every child in the City is ready to learn and ready to succeed.

The timing of the summit coincides with the opening of the Earth Institute’s new Program on Child Well-Being and Resilience, directed by Dr. Irwin Redlener.  The Program will focus on broad challenges affecting children and their long-term well-being and productivity in the United States and globally.

“Extensive research over the last several decades has left no doubt that investments in eliminating social and economic disparities in children, improving parental skills, focusing on early development and assuring universal access to pre-K programs can have life- long benefits for children, their communities and society as a whole,” said Dr. Redlener, “The election of Bill de Blasio affords a unique opportunity for New York to lead the way in making sure that every child is a success story; ready for work and life in the 21st Century.

"We're honored to host this Summit, which brings together many of NYC's leaders on the health, education and well-being of NYC's children" said Jeffrey Sachs, director of the Earth Institute.  "This is a time of great opportunity and promise for NYC, a time in which we can address the needs of all children in the city, including those in households confronting the hardships of poverty.  We are proud that Mayor-elect Bill de Blasio attended the conference, and I am confident that the Summit and the follow up will support the incoming Mayor to promote the well-being of NYC's children."