A Focus on Practical Results 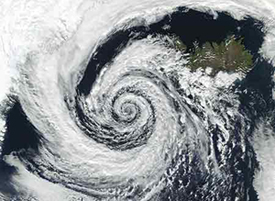 Leading climate scientist and activist James Hansen will direct a new policy-oriented climate program at the Earth Institute. Hansen, long known as the U.S. government’s top climate scientist, retired this year as director of the NASA Goddard Institute for Space Studies; he will now direct the newly founded Program on Climate Science, Awareness and Solutions. The program will adopt a two-fold strategy of climate research coupled with communications and outreach, aimed at conveying the results directly to high-level civic leaders and the media. Hansen said he hopes the program will drive policy and market reforms “needed to preserve a habitable planet.” He said these would include questions relevant to policymakers and civic leaders, issues such as the fossil fuel-emission targets that he argues must be achieved to stabilize climate.

The new program will conduct original research, including analyses of data on ongoing climate variability and projections of future changes; , the interplay of different physical forces at work; and the earth’s long-term past climate history. It will also look into ways to mitigate climate change. Hansen said, "The public is beginning to realize that climate is changing, but they need to know the implications for policies. To provide that information, we need to stay on top of the science."

The program will work closely with climate scientists, policy experts and faculty and staff across the Earth Institute, with the goal of reaching a broad audience and extending the program’s impact. "We are thrilled that the Earth Institute will host Jim Hansen's new climate program, which promises to make a major global contribution to a sustainable planet. The Earth Institute is blessed with truly great global leaders in climate science and policy, including James Hansen, Wally Broecker, Klaus Lackner and several others, plus superstar young Earth system scientists throughout the University. The Earth Institute aims to support this remarkable, indeed unique, assembly of talent to help the world to find a safer trajectory. Hansen's upcoming work will do that directly and also inspire the efforts of countless others," said Jeffrey Sachs, director of the Earth Institute. The Grantham Foundation has pledged up to $1 million over the next three years as a matching gift to encourage others to support the effort. It will contribute one dollar for every three raised in support of Hansen's program.

Hansen has been a pioneer in climate science and a leader in the field since the early 1980s, when he began testifying before Congress about projected climate changes that have since taken place. He was trained in physics and astronomy at the University of Iowa, where he received a PhD. in physics in 1967. He spent virtually all of his career at the Goddard Institute, which has supplied much of the basic data on the effects of carbon dioxide and other substances on climate. In recent years, Hansen has become an increasingly outspoken advocate of using science to counteract human-influenced changes to the climate.