The National Center for Disaster Preparedness, a research, policy and education institution that has worked for the past decade across the United States to strengthen responses to extreme weather, terrorism and other threats, has joined Columbia University's Earth Institute.

Previously based at Columbia's Mailman School of Public Health, the center will expand its focus internationally, working with the Earth Institute's 27 other centers and affiliates to deploy advances in earth sciences, sociology, environmental sustainability and other fields to prepare societies for a wide spectrum of disasters. 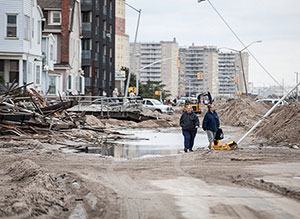 The National Center for Disaster Preparedness (NCDP) was established in 2003. Its research has included tracking the health and recovery of people affected by the attacks of Sept. 11, 2001, as well as the effects of Hurricane Katrina and the Deepwater Horizon oil spill in the Gulf of Mexico. Its studies have explored U.S. attitudes toward disaster preparedness, and tested new strategies for communicating with high-risk and vulnerable populations. It has trained more than 100,000 health and public-health practitioners to deal with emerging events, with a special emphasis on protecting children. Its 20 affiliated faculty represent a wide range of academic disciplines and university departments. Senior members will retain their appointments at the Mailman School.

Redlener, a pediatrician, is an expert on disaster policy, pandemic influenza and natural disasters. He is the author of the 2006 book Americans at Risk: Why We Are Not Prepared for Megadisasters and What We Can Do Now, and he previously served on the congressionally appointed National Commission on Children and Disasters. Following Hurricane Sandy, he was appointed by Gov. Andrew Cuomo to co-chair the New York State Ready Commission. He is also president and cofounder, along with musician Paul Simon, of the Children's Health Fund, which has established health-care programs in 25 of the nation's most medically underserved urban and rural communities. Redlener is a widely respected expert and policy advisor on poverty and access to health care.

The NCDP's deputy director and director of research is David Abramson, assistant professor of sociomedical sciences at Columbia University Medical Center. Trained in political science and public-health research, is currently leading studies on displaced families in Louisiana and Mississippi. He is also spearheading a study on the effects of the Deepwater Horizon spill on children.

While the NCDP has previously focused on domestic events, Redlener said the Earth Institute's global reach would help broaden its geographic scope. He said the new partnership would enable the NCDP to apply "more powerful science, and bring evidence-based influence to a wide range of international challenges," especially in the developing world. Among the potential threats requiring advance planning, he said, are hurricanes, earthquakes, tornadoes, cyberterrorism and pandemics.

"The NCDP leads cutting-edge research and policy analysis on how to cope with catastrophic threats, both in preparedness and response," said Jeffrey Sachs, director of the Earth Institute. "The world turns to Prof. Irwin Redlener for leadership in this area, and the Earth Institute is thrilled to welcome Prof. Redlener and his team. All over the world, from New York City to the drylands of Africa and beyond, disaster preparedness is high and rising on the policy agenda, and I have enormous confidence that NCDP will offer new and important solutions."