Large earthquakes from distant parts of the globe are setting off tremors around waste-fluid injection wells in the central United States, says a new study. Furthermore, such triggering of minor quakes by distant events could be precursors to larger events at sites where pressure from waste injection has pushed faults close to failure, say researchers. 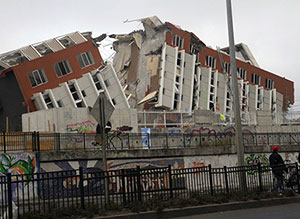 Among the sites covered: a set of injection wells near Prague, Okla., where the study says a huge earthquake in Chile on Feb. 27, 2010 triggered a mid-size quake less than a day later, followed by months of smaller tremors. This culminated in probably the largest quake yet associated with waste injection, a magnitude 5.7 event which shook Prague on Nov. 6, 2011. Earthquakes off Japan in 2011, and Sumatra in 2012, similarly set off mid-size tremors around injection wells in western Texas and southern Colorado, says the study. The paper appears this week in the leading journal Science, along with a series of other articles on how humans may be influencing earthquakes.

"The fluids are driving the faults to their tipping point," said lead author Nicholas van der Elst, a postdoctoral researcher at Columba University's Lamont-Doherty Earth Observatory. "The remote triggering by big earthquakes is an indication the area is critically stressed."

Tremors triggered by distant large earthquakes have been identified before, especially in places like Yellowstone National Park and some volcanically active subduction zones offshore, where subsurface water superheated by magma can weaken faults, making them highly vulnerable to seismic waves passing by from somewhere else. The study in Science adds a new twist by linking this natural phenomenon to faults that have been weakened by human activity.

A surge in U.S. energy production in the last decade or so has sparked what appears to be a rise in small to mid-sized earthquakes in the United States. Large amounts of water are used both to crack open rocks to release natural gas through hydrofracking, and to coax oil and gas from underground wells using conventional techniques. After the gas and oil have been extracted, the brine and chemical-laced water must be disposed of, and is often pumped back underground elsewhere, sometimes causing earthquakes.

"These passing seismic waves are like a stress test," said study coauthor Heather Savage, a geophysicist at Lamont-Doherty. "If the number of small earthquakes increases, it could indicate that faults are becoming critically stressed and might soon host a larger earthquake."

The 2010 magnitude 8.8 Chile quake, which killed more than 500 people, sent surface waves rippling across the planet, triggering a magnitude 4.1 quake near Prague 16 hours later, the study says. The activity near Prague continued until the magnitude 5.7 quake on Nov. 6, 2011 that destroyed 14 homes and injured two people. A study earlier this year led by seismologist Katie Keranen, also a coauthor of the new study, now at Cornell University, found that the first rupture occurred less than 650 feet away from active injection wells. In April 2012, a magnitude 8.6 earthquake off Sumatra triggered another swarm of earthquakes in the same place.The pumping of fluid into the field continues to this day, along with a pattern of small quakes.

The 2010 Chile quake also set off a swarm of earthquakes on the Colorado-New Mexico border, in Trinidad, near wells where wastewater used to extract methane from coal beds had been injected, the study says. The swarm was followed more than a year later, on Aug. 22 2011, by a magnitude 5.3 quake that damaged dozens of buildings. A steady series of earthquakes had already struck Trinidad in the past, including a magnitude 4.6 quake in 2001 that the U.S. Geological Survey (USGS) has investigated for links to wastewater injection.

The new study found also that Japan's devastating magnitude 9.0 earthquake on March 11, 2011 triggered a swarm of earthquakes in the west Texas town of Snyder, where injection of fluid to extract oil from the nearby Cogdell fields has been setting off earthquakes for years, according to a 1989 study in the Bulletin of the Seismological Society of America.  About six months after the Japan quake, a magnitude 4.5 quake struck Snyder.

The idea that seismic activity can be triggered by separate earthquakes taking place faraway was once controversial. One of the first cases to be documented was the magnitude 7.3 earthquake that shook California's Mojave Desert in 1992, near the town of Landers, setting off a series of distant events in regions with active hot springs, geysers and volcanic vents. The largest was a magnitude 5.6 quake beneath Little Skull Mountain in southern Nevada, 150 miles away; the farthest, a series of tiny earthquakes north of Yellowstone caldera, according to a 1993 study in Science led by USGS geophysicist David Hill.

In 2002, the magnitude 7.9 Denali earthquake in Alaska triggered a series of earthquakes at Yellowstone, nearly 2,000 miles away, throwing off the schedules of some of its most predictable geysers, according to a 2004 study in Geology led by Stephan Husen, a seismologist at the Swiss Federal Institute of Technology in Zürich. The Denali quake also triggered bursts of slow tremors in and around California's San Andreas, San Jacinto and Calaveras faults, according to a 2008 study in Science led by USGS geophysicist Joan Gomberg.

The new studymay be the first to find evidence of triggered earthquakes on faults critically stressed by waste injection. If it can be replicated and extended to other sites at risk of manmade earthquakes it could "help us understand where the stresses are," said William Ellsworth, an expert on human-induced earthquakes with the USGS who was not involved in the study.

In the same issue of Science, Ellsworth reviews the recent upswing in earthquakes in the central United States. The region averaged 21 small to mid-sized earthquakes each year from the late 1960s through 2000. But in 2001, that number began to climb, reaching a high of 188 earthquakes in 2011, he writes. The risk of setting off earthquakes by injecting fluid underground has been known since at least the 1960s, when injection at the Rocky Mountain Arsenal near Denver was suspended after a magnitude 4.8 quake or greater struck nearby—the largest tied to wastewater disposal until the one near Prague, Okla. In a report last year, the National Academy of Sciences called for further research to "understand, limit and respond [to]" seismic events induced by human activity.