Nearly 25 years after an international ban was placed on ivory, African elephants are being slaughtered at a rate that could bring about their extinction this century. By allowing the trade of ivory acquired before 1989 to continue, the ban put the burden on law enforcement to distinguish between legal ivory and poached. Now, a new method for dating elephant tusks, described in the latest issue of the Proceedings of the National Academy of Sciences (PNAS), could make it easier to enforce the ivory ban and save the African elephant from extermination say researchers. The method might also be applied to endangered rhinoceroses and other wildlife.

"We've developed a tool that allows us to determine the age of a tusk or piece of ivory, and this tells us whether it was acquired legally," said the study's lead author, Kevin Uno, a postdoctoral researcher at Columbia University's Lamont-Doherty Earth Observatory. "Our dating method is affordable for government and law enforcement agencies and can help tackle the poaching and illegal trade crises." 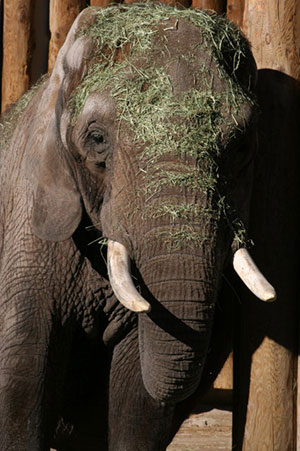 After the death of their popular elephant Misha, Utah's Hogle Zoo agreed to donate one of her tusks to science. (Hogle Zoo)

In the highly-regulated market for legal ivory, finding tusks for scientific research is not easy. With the help of a Salt Lake City zoo and several agencies in Kenya, the researchers gained access to the tusks of two elephants: Misha, euthanized at Utah's Hogle Zoo in 2008, and Amina, who died naturally at Kenya's Samburu National Preserve in 2006. Study co-author Thure Cerling, a geochemist at the University of Utah, read about Misha's death in the local newspaper and immediately called the zoo. "They told us, we can work with you because we haven't buried her yet," he said. The researchers traveled to Kenya for Amina's tusk, which they sawed into domino-sized samples under the watch of Kenya Wildlife Service.

In the lab, the researchers measured radiocarbon levels at the base of each tusk to independently calculate when the elephants died. Similar tests were done on monkey hair, hippo canines, oryx horn and elephant tail hairs to verify that the method worked across tissues of different ages. Two steps were key to getting precise ages. The researchers sampled each tusk lengthwise, along the growth ring, and used the most advanced technology--an accelerator mass spectrometer--to measure the radiocarbon. In addition, the study calculated growth rates for the teeth, which can be applied to elephant teeth in the fossil record to understand how climate and vegetation varied in Africa when humans were evolving. In other applications in wildlife forensics, the technique can be applied to rhino horns, which are intensely sought after for their perceived medicinal benefits.

The researchers' method complements a forensics tool developed at the University of Washington's Center for Conservation Biology that allows researchers to track ivory seizures back to their source. In a 2004 study in PNAS, center director Sam Wasser laid out a map of African elephant populations based on DNA from their dung that, when matched against a piece of seized ivory, could tell investigators where the ivory originated. The DNA tool has helped law enforcement identify where elephants are being poached; the new radiocarbon tool tells them when. "It can reliably tell us, is it legal ivory or not?" said Wasser, who was not involved in the study.

Elephant poaching is now at its highest level since record-keeping began in 2002, according to a 2012 report by the Convention on International Trade in Endangered Species (CITES). More elephants are slaughtered today—at the rate of 30,000 a year--than before the 1989 ban, experts say. Some 423,000 African elephants are left, according to the International Union for Conservation of Nature's elephant database. 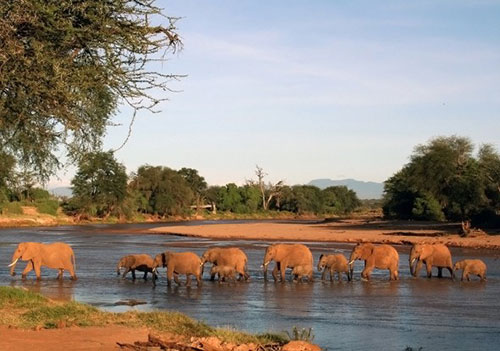 Global demand for elephant ivory is fueling the slaughter of African elephants. (Lucy King, Save the Elephants)

Much of the illegal ivory leaves Africa through Tanzania and Kenya and ends up in Asia, where it is carved into religious icons, decorative art and signature seals popular among the Chinese and Japanese. While China imports about 70 percent of the smuggled ivory, the next biggest market is the United States, where ivory is worked into the handles of guns and knives, said Richard Ruggiero, an expert at the U.S. Fish and Wildlife Service. Global seizures of illegal ivory reached a new record in 2011, at 86,000 pounds (39,000 kilograms), equaling nearly 6,000 elephants. But the magnitude of the problem is no match for law enforcement. "With poaching rising exponentially because of exploding demand we are actually losing ground," said Ruggiero.

A kilogram of ivory—about 2.2 pounds--fetched $200 in 2004; by 2007, a kilo was worth $850. Escalating prices are driving Africa's notorious militias, including the Lord's Resistance Army in northern Uganda and south Sudan, the Shabab in Somalia and the Janjaweed of Darfur to kill elephants for tusks to buy guns, The New York Times reported last year. Organized crime is now involved in smuggling ivory out of Africa, leading former U.S. Secretary of State Hillary Clinton to speak out against the problem last year. At a Senate Committee of Foreign Relations hearing last year, former U.S. Sen. John Kerry (now Clinton's successor) testified to the global security threat posed by elephant poaching.

The disappearance of the African elephant will mean more than the loss of a majestic, highly intelligent creature, ecologists say. It could change the structure of Africa's savannahs and rain forests. "They are environmental architects," said Wasser. "They keep woods down in the savannah and are the most important dispersers of seeds of rain forest trees. The central African rain forest is the second most important area on earth for capturing carbon dioxide and storing it."

Time Running out to Save Elephants from Ivory Trade, National Geographic, Jan. 31, 2013