In Himalayas, Assessing Climate Threats to Ice, and Water Supply

In many ways, the tiny, landlocked eastern Himalayan kingdom of Bhutan sits apart from the modern world; its rugged landscapes cradle swift-flowing rivers, expansive old-growth forests and hundreds of glaciers. Combining selective modernization with ancient traditions, it is the only country that uses Gross National Happiness as a metric for success. But the world is intruding. Rapid climate change is melting glaciers across the Himalayas, creating deadly flash-flood hazards and threatening a water system that feeds agriculture and hydropower here and for more than a billion people in the plains below. Now, Bhutanese and Earth Institute researchers are starting a broad program to understand how climate may affect the country, and to help plan adaptive measures. Studies will include studies of tree rings, geology and glaciers to understand how climate has affected, and will affect the glaciers, along with social studies and educational exchanges. Pending funding, researchers hope to launch much of the work in 2012. 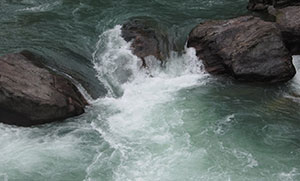 The volume of fast-flowing rivers that lace the country could decrease with warming in coming years. (Ben Orlove/CRED)

From the Himalayas to the Rockies and Andes, mountain glaciers are melting worldwide. The Himalayas, sometimes called the “Third Pole,” contain nearly a third of the world’s non-polar ice, and the effects there could be particularly devastating. Runoff from ice, snow and rain currently provides irrigation and hydropower for the mountains’ 210 million people, plus 1.3 billion living downstream in the great river-basin plains of India, Bangladesh and other nations. The most comprehensive assessment of Himalayan glaciers yet, published this month by the International Centre for Integrated Mountain Development, says ice, including in Bhutan, has shrunk around a fifth in the last 30 years, and snow cover is declining. With the trend projected to continue, this could reduce water flow during much of the year, or make it too erratic to be usable. More immediately, meltwater lakes are rapidly building at the snouts of fast-receding glaciers; they sometimes drain suddenly in the form of a so-called glacial lake outburst flood, which can wipe out whole valleys—a kind of tsunami from above.

Bhutan is a stark example of these problems. Since the recent completion of a huge dam project, hydropower provides nearly a quarter of national income, and 80 percent of its people depend directly on agriculture. Bhutan’s national newspaper recently reported that along with glacier declines, snow cover has decreased about 14 percent in the last eight years, and the timing of snows has changed. With glaciers declining and more precipitation coming as rain, or coming in the wrong season, rivers may eventually become drier part of the year, including in summer, when gradual melt from glaciers adds to monsoon rains. As glaciers shrink, Bhutan now has some 2,700 high-elevation meltwater lakes, many growing at perilous rates behind leaky natural dams of rubble; Bhutanese scientists have identified at least 24 that could burst in the near future. One in the country’s north, at the head of the Raphstreng glacier, burst in 1994, killing dozens of people downstream. It is quickly refilling. 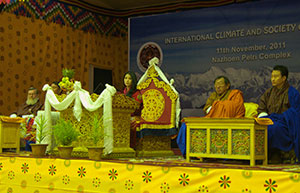 Earth Institute scientists have worked with Bhutanese colleagues since 2002, when the Lamont-Doherty Earth Observatory Tree-Ring Lab began sampling trees as part of a project to map changes in the Asian monsoon rains. The project is headed by tree-ring lab director Edward Cook. In 2010, Cook and Bhutanese colleagues began planning wider collaborations with others including Lamont geochemist Joerg Schaefer, who studies advances and retreats of glaciers. Last month they co-organized a one-day conference on Himalayan climate in Bhutan’s capital, Thimpu. Speakers included scientists from Bhutan and India, Brigham Young University and the Earth Institute-affiliated  Columbia Water Center, International Research Institute for Climate and Society and Center for Research on Environmental Decisions (CRED). The meeting served as an official runup to a summit in Thimpu among Bangladesh, Bhutan, India and Nepal shortly after; at the end, the countries agreed to work together on climate-related food and water issues.  (Also, in August 2011, Prime Minister Jigme Thinley and Earth Institute director Jeffrey Sachs co-hosted a conference in Bhutan on Gross National Happiness.)

“Bhutan is literally in the bull’s eye of missing data for past and present climate and glacier data,” said Cook. Most Himalayan climate research so far has focused on regions to the west, he said, so information is badly needed in the east to project climate into coming decades. One overarching question: whether Himalayan glaciers will melt uniformly in response to warming, or if some regions might actually see more ice. Computer models do not agree on whether the eastern Himalayas might see more or less high-elevation precipitation in the future. Some scientists cite preliminary calculations that Bhutan’s glaciers could be less sensitive to changing climate than others’—yet so far glaciers here seem to be retreating faster than those in surrounding areas. Figuring out how the system works is key to projecting future water flow, said Cook. 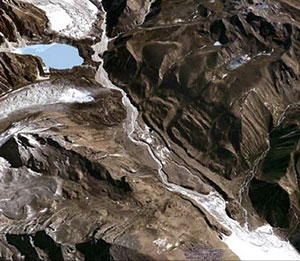 The Raphstreng/Bechung glaciers, seen here in a satellite image, feed rivers below—and a growing meltwater lake (blue) held back only by a rubbly dam that threatens to burst. (Google Earth)

To help answer such questions, Schaefer and Summer Rupert of Brigham Young hope to plot past and present advances and retreats of Bhutan’s glaciers, by mapping rock deposits left behind by ice, and using newly perfected geochemical techniques for dating them exactly. At the same time, Cook’s group will expand its studies of tree rings, from which they already have many year-by-year records of temperature going back hundreds of years. Combined, this should give scientists a better picture of how weather has affected the glaciers in the past, and thus how it will affect them in the future. The researchers hope to train and use both U.S. and Bhutanese students, in part through the Earth Institute’s graduate Climate and Society program. Cook has already been training Bhutanese students in tree-ring work.

Ben Orlove, a social scientist affiliated with CRED who attended the November climate meeting, said, “Columbia University geosciences have great value to offer here, in that they can trace the physics.” The next step, said Orlove, would be translating findings into ways to manage water resources and natural hazards. “I am hoping that we could help coordinate bridging of scientific information to decision makers,” he said.

Much of the planned fieldwork would be near the remote Raphstreng glacier, scene of the 1994 outburst flood. With the glacier pulling back 100 feet or more each year, a meltwater lake has been rapidly growing, held back only by a leaky dam of shattered rock left by the glacier’s last maximum advance. From 2009 until late 2011, the government slightly lowered the lake level by sending in pick-and-shovel brigades to open an outlet. However, hampered in part by bad weather and the three-day trek from the nearest road, they were unable to lower it as much as hoped. Among other ideas, Columbia Water Center director Upmanu Lall has floated the idea of inserting siphons into the lake to pull out water, using only gravity. Hydrologists hope to advise also on issues such as siting of future hydropower plants and other decisions that will have to be made based on the availability of water or threat of floods.

“We need to know how the glaciers are going to change over the next 50 years, and right now we know almost nothing,” said Schaefer. “There’s no area on earth where models perform so poorly. That means we have to get out on the ground.”