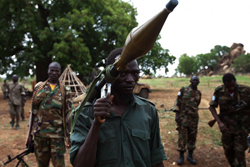 In the first study of its kind, researchers have linked a natural global climate cycle to periodic increases in warfare. The arrival of El Niño, which every three to seven years boosts temperatures and cuts rainfall, doubles the risk of civil wars across 90 affected tropical countries, and may help account for a fifth of worldwide conflicts during the past half-century, say the authors. The paper, written by an interdisciplinary team at Columbia University’s Earth Institute, appears in the current issue of the leading scientific journal Nature.

In recent years, historians and climatologists have built evidence that past societies suffered and fell due in connection with heat or droughts that damaged agriculture and shook governments. This is the first study to make the case for such destabilization in the present day, using statistics to link global weather observations and well-documented outbreaks of violence. The study does not blame specific wars on El Niño, nor does it directly address the issue of long-term climate change. However, it raises potent questions, as many scientists think natural weather cycles will become more extreme with warming climate, and some suggest ongoing chaos in places like Somalia are already being stoked by warming climate.

“The most important thing is that this looks at modern times, and it’s done on a global scale,” said Solomon M. Hsiang, the study’s lead author, a graduate of the Earth Institute’s Ph.D. in sustainable development. “We can speculate that a long-ago Egyptian dynasty was overthrown during a drought. That’s a specific time and place, that may be very different from today, so people might say, ‘OK, we’re immune to that now.’  This study shows a systematic pattern of global climate affecting conflict, and shows it right now.”

The cycle known as the El Niño-Southern Oscillation, or ENSO, is a periodic warming and cooling of the tropical Pacific Ocean. This affects weather patterns across much of Africa, the Mideast, India, southeast Asia, Australia, and the Americas, where half the world’s people live. During the cool, or La Niña, phase, rain may be relatively plentiful in tropical areas; during the warmer El Niño, land temperatures rise, and rainfall declines in most affected places. Interacting with other factors including wind and temperature cycles over the other oceans, El Niño can vary dramatically in power and length. At its most intense, it brings scorching heat and multi-year droughts. (In higher latitudes, effects weaken, disappear or reverse; La Niña conditions earlier this year helped dry the U.S. Southwest and parts of east Africa.)

The scientists tracked ENSO from 1950 to 2004 and correlated it with onsets of civil conflicts that killed more than 25 people in a given year. The data included 175 countries and 234 conflicts, over half of which each caused more than 1,000 battle-related deaths. For nations whose weather is controlled by ENSO, they found that during La Niña, the chance of civil war breaking out was about 3 percent; during El Niño, the chance doubled, to 6 percent. Countries not affected by the cycle remained at 2 percent no matter what. Overall, the team calculated that El Niño may have played a role in 21 percent of civil wars worldwide—and nearly 30 percent in those countries affected by El Niño.

Coauthor Mark Cane, a climate scientist at Columbia’s Lamont-Doherty Earth Observatory, said that the study does not show that weather alone starts wars. “No one should take this to say that climate is our fate. Rather, this is compelling evidence that it has a measurable influence on how much people fight overall,” he said. “It is not the only factor--you have to consider politics, economics, all kinds of other things.” Cane, a climate modeler, was among the first to elucidate the mechanisms of El Niño, showing in the 1980s that its larger swings can be predicted—knowledge now used by organizations around the world to plan agriculture and relief services.

The authors say they do not know exactly why climate feeds conflict. “But if you have social inequality, people are poor, and there are underlying tensions, it seems possible that climate can deliver the knockout punch,” said Hsiang. When crops fail, people may take up a gun simply to make a living, he said. Kyle C. Meng, a sustainable-development Ph.D. candidate and the study’s other author, pointed out that social scientists have shown that individuals often become more aggressive when temperatures rise, but he said that whether that applies to whole societies is only speculative.

Bad weather does appear to tip poorer countries into chaos more easily; rich Australia, for instance, is controlled by ENSO, but has never seen a civil war. On the other side, Hsiang said at least two countries “jump out of the data.” In 1982, a powerful El Niño struck impoverished highland Peru, destroying crops; that year, simmering guerrilla attacks by the revolutionary Shining Path movement turned into a full-scale 20-year civil war that still sputters today. Separately, forces in southern Sudan were already facing off with the domineering north, when intense warfare broke out in the El Niño year of 1963. The insurrection abated, but flared again in 1976, another El Niño year. Then, 1983 saw a major El Niño--and the apocalyptic outbreak of more than 20 years of fighting that killed 2 million people, arguably the world’s bloodiest conflict since World War II. It culminated only this summer, when South Sudan became a separate nation; fighting continues in border areas. Hsiang said some other countries where festering conflicts have tended to blow up during El Niños include El Salvador, the Philippines and Uganda (1972); Angola, Haiti and Myanmar (1991); and Congo, Eritrea, Indonesia and Rwanda (1997).

The idea that environment fuels violence has gained currency in the past decade, with popular books by authors like Jared Diamond, Brian Fagan and Mike Davis. Academic studies have drawn links between droughts and social collapses, including the end of the Persian Gulf’s Akkadian empire (the world’s first superpower), 6,000 years ago; the AD 800-900 fall of Mexico’s Maya civilization; centuries-long cycles of warfare within Chinese dynasties; and recent insurgencies in sub-Saharan Africa. Last year, tree-ring specialists at Lamont-Doherty Earth Observatory published a 1,000-year atlas of El Niño-related droughts; data from this pinpoints droughts coinciding with the downfall of the Angkor civilization of Cambodia around AD 1400, and the later dissolution of kingdoms in China, Vietnam, Myanmar and Thailand.

Some scientists and historians remain unconvinced of connections between climate and violence. “The study fails to improve on our understanding of the causes of armed conflicts, as it makes no attempt to explain the reported association between ENSO cycles and conflict risk,” said Halvard Buhaug, a political scientist with the Peace Research Institute Oslo in Norway who studies the issue. “Correlation without explanation can only lead to speculation.”  Another expert, economist Marshall Burke of the University of California, Berkeley, said the authors gave “very convincing evidence” of a connection. But, he said, the question of how overall climate change might play out remains. “People may respond differently to short-run shocks than they do to longer-run changes in average temperature and precipitation,” he said. He called the study “a useful and illuminating basis for future work.”

Hear radio interviews with the authors: