A new study suggests that Homo erectus, a precursor to modern humans, was using advanced tool-making methods in East Africa 1.8 million years ago, at least 300,000 years earlier than previously thought. The study, published this week in Nature, raises new questions about where these tall and slender early humans originated and how they developed sophisticated tool-making technology. 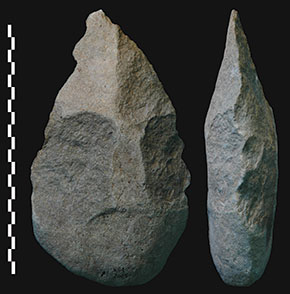 Homo erectus appeared about 2 million years ago, and ranged across Asia and Africa before hitting a possible evolutionary dead-end, about 70,000 years ago. Some researchers think Homo erectus evolved in East Africa, where many of the oldest fossils have been found, but the discovery in the 1990s of equally old Homo erectus fossils in the country of Georgia has led others to suggest an Asian origin.  The study in Nature does not resolve the debate but adds new complexity. At 1.8 million years ago, Homo erectus in Dmanisi, Georgia was still using simple chopping tools while in West Turkana, Kenya, according to the study, the population had developed hand axes, picks and other innovative tools that anthropologists call “Acheulian.”

In the summer of 2007, a team of French and American researchers traveled to Kenya’s Lake Turkana in Africa’s Great Rift Valley, where earth’s plates are tearing apart and some of the earliest humans first appear. Anthropologist Richard Leakey’s famous find--Turkana Boy, a Homo erectus teenager who lived about 1.5 million years ago—was excavated on Lake Turkana’s western shore and is still the most complete early human skeleton found so far. 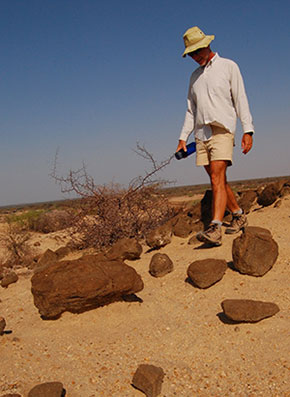 Study co-author, Craig Feibel, is among the team of researchers that returned in 2007 to West Turkana to put dates on hand axes excavated earlier. Credit: Lamont-Doherty Earth Observatory.

Six miles from Turkana Boy, the researchers headed for Kokiselei, an archeological site where both Acheulian and simpler “Oldowan” tools had been found earlier. Their goal: to establish the age of the tools by dating the surrounding sediments. Past flooding in the area had left behind layers of silt and clay that hardened into mudstone, preserving the direction of Earth’s magnetic field at the time in the stone’s magnetite grains.  The researchers chiseled away chunks of the mudstone at Kokiselei to later analyze the periodic polarity reversals and come up with ages. At Lamont-Doherty’s Paleomagnetics Lab, they compared the magnetic intervals with other stratigraphic records to date the archeological site to 1.76 million years.

“We suspected that Kokiselei was a rather old site, but I was taken aback when I realized that the geological data indicated it was the oldest Acheulian site in the world,” said the study’s lead author, Christopher Lepre, a geologist who also has joint appointments at Rutgers and Lamont-Doherty. The oldest Acheulian tools previously identified appear in Konso, Ethiopia, about 1.4 million years ago, and India, between 1.5 million and 1 million years ago. 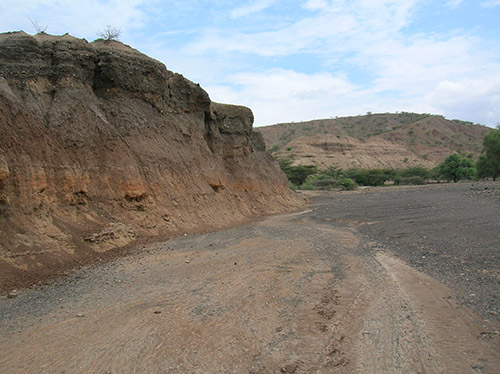 Tools made by early humans were found at Kokiselei, Kenya, in Lake Turkana's ancient shoreline sediments pictured above. Credit: Lamont-Doherty.

The Acheulian tools at Kokiselei were found just above a sediment layer associated with a polarity interval called the “Olduvai Subchron.” It is named after Tanzania’s Olduvai Gorge, where pioneering work in the 1930s by Leakey’s parents, Louis and Mary, uncovered a goldmine of early human fossils. In a study in Earth and Planetary Science Letters last year, Lepre and Kent found that a well-preserved Homo erectus skull found on east side of Lake Turkana, at Koobi Fora Ridge, also sat above the Olduvai Subchron interval, making the skull and Acheulian tools in West Turkana about the same age.

Anthropologists have yet to find an Acheulian hand axe gripped in a Homo erectus fist but most credit Homo erectus with developing the technology. Acheulian tools were larger and heavier than the pebble-choppers used previously and also had chiseled edges that would have helped Homo erectus butcher elephants and other scavenged game left behind by larger predators or even have allowed the early humans to hunt such prey themselves. “You could whack away at a joint and dislodge the shoulder from the arm, leg or hip,” said Eric Delson, a paleoanthropologist at CUNY’s Lehman College who was not involved in the study. “The tools allowed you to cut open and dismember an animal to eat it.”

The East African landscape that Homo erectus walked from about 2 million to 1.5 million years ago was becoming progressively drier, with savanna grasslands spreading in response to changes in the monsoon rains. “We need to understand also the ancient environment because this gives us an insight into how processes of evolution work—how shifts in early human biology and behavior are potentially caused by changes in the climate, vegetation or animal life that is particular to a habitat,” said Lepre. The team is currently excavating a more than 2 million year old site in Kenya to learn more about the early Oldowan period.