A Major Glacier is Undermined From Below

Stronger ocean currents beneath West Antarctica’s Pine Island Glacier Ice Shelf are eroding the ice from below, speeding the melting of the glacier as a whole, according to a new study in Nature Geoscience. A growing cavity beneath the ice shelf has allowed more warm water to melt the ice, the researchers say—a process that feeds back into the ongoing rise in global sea levels. The glacier is currently sliding into the sea at a clip of four kilometers (2.5 miles) a year, while its ice shelf is melting at about 80 cubic kilometers a year - 50 percent faster than it was in the early 1990s - the paper estimates. 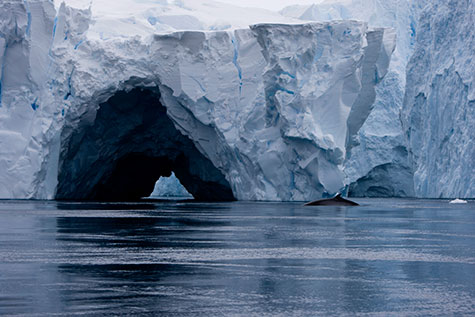 Upwelling seawater along parts of Pine Island Glacier Ice Shelf has carved out caves in the ice and drawn wildlife like this whale. Credit: Maria Stenzel, all rights reserved.

“More warm water from the deep ocean is entering the cavity beneath the ice shelf, and it is warmest where the ice is thickest,” said study’s lead author, Stan Jacobs, an oceanographer at Columbia University’s Lamont-Doherty Earth Observatory.

In 2009, Jacobs and an international team of scientists sailed to the Amundsen Sea aboard the icebreaking ship Nathaniel B. Palmer to study the region’s thinning ice shelves—floating tongues of ice where landbound glaciers meet the sea. One goal was to study oceanic changes near the Pine Island Glacier Ice Shelf,  which they had visited in an earlier expedition, in 1994. The researchers found that in 15 years, melting beneath the ice shelf had risen by about 50 percent. Although regional ocean temperatures had also warmed slightly, by 0.2 degrees C or so, that was not enough to account for the jump.

The local geology offered one explanation. On the same cruise, a group led by Adrian Jenkins, a researcher at British Antarctic Survey and study co-author, sent a robot submarine beneath the ice shelf, revealing an underwater ridge. The researchers surmised that the ridge had once slowed the glacier like a giant retaining wall. When the receding glacier detached from the ridge, sometime before the 1970s, the warm deep water gained access to deeper parts of the glacier. Over time, the inner cavity grew, more warm deep water flowed in, more melt water flowed out, and the ice thinned. With less friction between the ice shelf and seafloor, the landbound glacier behind it accelerated its slide into the sea. Other glaciers in the Amundsen region have also thinned or widened, including Thwaites Glacier and the much larger Getz Ice Shelf.

One day, near the southern edge of Pine Island Glacier Ice Shelf, the researchers directly observed the strength of the melting process as they watched frigid,  seawater appear to boil on the surface like a kettle on the stove. To Jacobs, it suggested that deep water, buoyed by added fresh glacial melt, was rising to the surface in a process called upwelling. Jacobs had never witnessed upwelling first hand, but colleagues had described something similar in the fjords of Greenland, where summer runoff and melting glacier fronts can also drive buoyant plumes to the sea surface.

In recent decades, researchers have found evidence that Antarctica is getting windier, and this may also help explain the changes in ocean circulation. Stronger circumpolar winds would tend to push sea ice and surface water north, says Jacobs. That in turn, would allow more warm water from the deep ocean to upwell onto the Amundsen Sea’s continental shelf and into its ice shelf cavities. 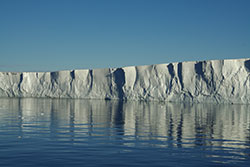 Pine Island Glacier, among other ice streams in Antarctica, is being closely watched for its potential to redraw coastlines worldwide. Global sea levels are currently rising at about 3 millimeters (.12 inches) a year. By one estimate, the total collapse of Pine Island Glacier and its tributaries could raise sea level by 24 centimeters (9 inches).

The paper adds important and timely insights about oceanic changes in the region, says Eric Rignot, a professor at University of California at Irvine and a senior research scientist at NASA’s Jet Propulsion Laboratory. “The main reason the glaciers are thinning in this region, we think, is the presence of warm waters,” he said. “Warm waters did not get there because the ocean warmed up, but because of subtle changes in ocean circulation. Ocean circulation is key. This study reinforces this concept.”

The study received funding from the US National Science Foundation and the UK National Environment Research Council.