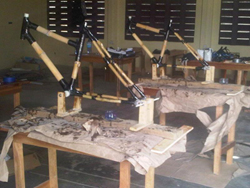 KUMASI, Ghana, January 18, 2011--The Bamboo Bike Project (BBP) and the Millennium Cities Initiative (MCI) at the Earth Institute, Columbia University, along with Ghana-based Bamboo Bikes Limited (BBL) have launched a two week long bamboo bike training program to begin production of 750 bikes for a test run in Kumasi, Ghana. The training program will culminate in the creation of the first large-scale bamboo bike production factory in the world, with ambitions of producing up to 20,000 affordable bikes a year to serve the transportation needs of the rural poor in Ghana.

"This is a wonderful achievement for the Bamboo Bike Project, MCI and our partners in Ghana. My colleagues and I look forward to the next key step -- large-scale production of the bamboo bikes locally at the new factory. This effort will create jobs and incomes for the community, and a quality product for consumers," said Jeffrey Sachs, Director of the Earth Institute, Columbia University.

Bamboo bicycles fill an extremely important need in sub-Saharan Africa. Lack of suitable and affordable transportation often limits farm production, market access, health care, and education, and increases the burden on those who collect fuel, wood and water. Additionally, most of the bicycles in use today in Africa are generally of poor quality, need frequent repair and do not work well in African conditions. To this end, the Bamboo Bike Project was established at Columbia University's Earth Institute to enhance access to safe, reliable and multi-purpose transportation in rural communities of sub-Saharan Africa.

"This is the moment we have been working toward for many months," said John Mutter, Director of the Bamboo Bike Project at Columbia. "Finally, everything is in place to get production of bamboo bikes going the way we had always dreamed of - in Africa, by Africans, for Africans."

The Bamboo Bike Studio (BBS) team has built over 300 bikes in New York, and has taken their bike assembly expertise to Ghana to train 11 BBL technicians over a two week period ending this week. Prof. Mutter is also participating in the training, along with several members of BBL's management team. The training program is focusing on several key components, including factory design and setup, bamboo selection and drying, bamboo frame building, and final bike assembly. At the end of the training, BBL will move forward with meeting an initial order of 750 bikes to be distributed to NGOs throughout Ghana.

The project designed, built and tested an initial bamboo bike prototype in Ghana with frame sections made from native bamboo rather than the commonly used steel. Bamboo is grown locally in many regions of Africa, and the manufacturing of bicycle frames does not require costly infrastructure or reliable electricity. Bamboo framed bicycles are lighter and stronger than steel-framed bikes, adaptable to difficult road conditions and can be easily modified for different needs, such as carrying farm loads, passengers, food, water and medicine. Among the many groups that could benefit from bamboo bikes include health care workers, students, and farmers.

The training program and test run is being undertaken by a team led by Marty Odlin, Assistant Director of the Education Center for Sustainable Engineering at Columbia University and Co-Director of the Bamboo Bike Studio in Brooklyn, New York, along with Justin Aguinaldo and Benjamin Masters of BBS. In Kumasi, the team is partnering with Bamboo Bikes Limited (BBL), a bamboo bike building company established and directed by local investor Kwame Sarpong.

BBL was established by its Chairman, Kwame Sarpong, a financial consultant/businessman and native of Kumasi, as the first large-scale bamboo bike production company in Africa. BBL is responsible for managing the production facility, and supplying the labor, bamboo and bike parts for the production test run and subsequent scale-up. It will be responsible for all operational matters, as well as marketing and outreach efforts in Ghana. To this end, BBL will be the chief driver of the project moving forward.

"We are very excited, after more than two years, to have finally reached the stage of training, which will be immediately followed by production," said Sarpong. "Given the caliber of the people we have recruited, we expect to produce bicycles that are not only lighter but also stronger than the traditional bicycles. We intend to make the quality of our product our hallmark."

BBP works closely with the Millennium Cities Initiative (MCI), which helps under-resourced sub-Saharan African cities create employment, stimulate enterprise development, and foster economic growth in order to meet the Millennium Development Goals (MDGs). MCI has been instrumental in establishing the bamboo bike investment in Ghana, attracting donors such as the UK Charities Trust and the Tides Foundation, and facilitating many of the operational aspects of the project.

The project has also benefitted from significant facilitation from the Honorable Mayor of Kumasi, Samuel Sarpong, the Kumasi Metropolitan Assembly (KMA) and MCI Ghana. The Mayor facilitated the entry of BBL into local districts with significant bamboo sources. The Mayor then worked with the business desk at the KMA to assist BBL with solving some of the concerns related to the project site.  In addition, a smaller test run in May 2010 was facilitated by MCI Ghana as well as the Millennium Village project (MVP) in Bonsaaso, Ghana.

The bamboo bike training and test run is a significant achievement for African transportation. Upon successful completion of the test run, the BBS project research and development team will work with BBL to make the necessary adjustments to the manufacturing process to ensure that implementation of large-scale production can be achieved. Large-scale production will ultimately help deliver a sustainable and affordable form of transportation to rural African populations, while also creating local employment opportunities.