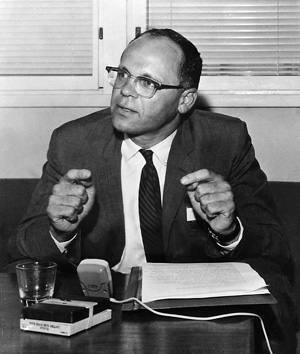 Dr. John Ertle “Jack” Oliver, a geophysicist with roots at Lamont-Doherty Earth Observatory whose research helped revolutionize our understanding of the basic forces shaping the planet, died of cancer at his home in Ithaca, N.Y., on Wednesday, Jan. 5, 2011. He was 87.

Together with fellow Lamonters Bryan Isacks and Lynn Sykes, he wrote a paper in 1968, “Seismology and the new Global Tectonics,” which made a compelling geophysical case for the then-novel theory of plate tectonics, a theory that now forms the basis for all our current understanding of how the Earth works.

“It was literally the bible for understanding seismology,” said Larry D. Brown, a former student of Oliver’s who is now chairman of Cornell’s Department of Earth and Atmospheric Sciences. “It was one of the top five seminal papers on plate tectonics.”

“Jack Oliver, along with Bryan Isacks, Lynn Sykes, and others in the Lamont seismology group, showed how the properties of earthquakes were a near-perfect fit to the emerging theory of plate tectonics,” said Arthur L. Lerner-Lam, associate director of the seismology division at Lamont. “Their work was key in convincing scientists of the explanatory power of the ‘new global tectonics,’ and opened up new areas of research that even today remain fundamental.”

Born on Sept. 26, 1923 in Massillon, Ohio, to Chester Oliver and Marie Ertle Oliver, Oliver attended Columbia on a football scholarship, earned his bachelor’s degree in 1947 and went to earn his masters degree in physics and a PhD. in geophysics at Lamont, working under Maurice “Doc” Ewing, in 1953.

He headed the seismology program at Lamont from 1955-71 and chaired the Department of Geology at Columbia University from 1969-71.

He was one of the first scientists to understand how to detect nuclear explosions using seismic waves, and that work led to his becoming an advisor for the Nuclear Test Ban Treaty in 1958-59, and a delegate to the negotiations in Geneva. He moved to Cornell University in 1971 to be chairman of the Department of Geological Sciences, and founding director of the Institute for the Study of the Continents at Cornell. 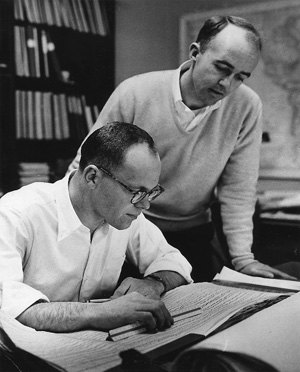 He helped establish the Consortium for Continental Reflection Profiling Project, which pioneered in the large-scale exploration of the continental lithosphere using seismic reflection techniques.

“Most people saw Jack as a seismologist. To me, Jack was an explorer, in the best scientific sense of the word,” Brown said. “Jack was always seeking the grand mysteries. Thus it came as no surprise to me when a mutual colleague reported that during a phone call just last week, Jack was actually excited about finally finding out what was ‘on the other side.’”

Oliver was a member of the National Academy of Sciences and president of both the Seismological Society of America and the Geological Society of America. He authored or co-authored over 200 scientific papers and visited over 55 countries during his years of geophysics research. He wrote several books, including The Incomplete Guide to the Art of Discovery and Shocks and Rocks; Seismology in the Plate Tectonics Revolution, and Shakespeare Got It Wrong: It's Not "to Be," It's "to Do": Autobiographical Memoirs of a Lucky Geophysicist.

At the end of his autobiography, available online, Oliver indulges in a weakness for limericks, and included this one among many:

The youth wondered what he should be.
His prof said, “You’re missing the key.
Life’s not to be, but to do.
Pick a task, follow through.
You’ll live ever after most happily.”

A funeral Mass was scheduled for 10 a.m. Monday, Jan. 10, at St. Catherine of Siena Church. A reception was to be held at 1 p.m. at Kendal of Ithaca, the retirement community where Oliver lived.