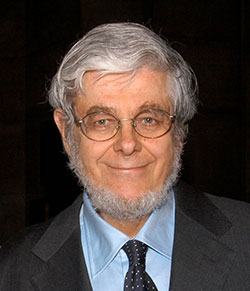 Robert Pollack, biology professor and the director of the Earth Institute’s Center for the Study of Science and Religion, sums up his academic interests on the biology department’s Web site this way: “To reconsider the large questionâ€”is the natural normative?â€”from both scientific and religious perspectives at once.” Pollack also holds positions as a lecturer at the Columbia University Center for Psychoanalytic Training and Research (since 1998), and an adjunct Professor for Science and Religion at Union Theological Seminary (since 2002). In 2011, he will become the director of the University Seminars at Columbia.

After he served as the 11th dean of Columbia College (1982-89), Pollack wrote his first book, Signs of Life: the language and meaning of DNA, and then decided to cede his role as an NIH-funded researcher in order to pursue questions that lie at the junction of what he terms “the unknown and the unknowable.” He writes, “I discovered the great need, interest, and yearning of people working out of religious commitment for facts about the natural world presented in an unthreatening way.”

With initial time-limited startup funding from the Office of the Provost, Pollack founded the Center for Science and Religion in 2000. Soon thereafter, Jeffrey D. Sachs came to Columbia and began to expand the reach of the Earth Institute. Pollack and Sachs agreed that the Earth Institute would be a suitable home for the CSSR. According to Pollack, “It became clear to us both that the obligations of global sustainable development were as much an ethical and moral obligation as a political or scientific one.”

Today Pollack shares the tasks of CSSR director with Cynthia Peabody. In lecture series, symposia, classes, and collaborations with community groups and colleagues in many religious traditions, Pollack and his CSSR associates, along with scientists whom they invite from other centers within the Earth Institute, have begun to wrestle with issues around sustainability and its ethical underpinnings. Pollack is interested in exploring, among other areas, people’s resistance to refraining from activities that are bad for the planet. Why, if everyone believes the reports of the environmental effects of global industrialization and consumption, are people not abandoning practices that they know are bound to have catastrophic consequences? According to Pollack, “The easy solution isn’t doable. It isn’t doable, not because of ignorance, but because the facts are so terrifying that people try to avoid confronting the reality.”

In 2009, Pollack and his wife, Amy, an artist and a farmer, became the first faculty advisors to GreenBorough, a Columbia College Special Interest Community in which sophomores, juniors and seniors with a common interest in environmental issues live together and explore their shared interest through programming. The mission of the GreenBorough Special Interest Community is “to establish a community of students to develop creative and practical ways to reduce their impact on the environment and increase campus awareness of environmental issues by example and education.”

Pollack’s style of perpetual inquiry and conversation seems particularly well suited to the role of an advisor to a Special Interest Community. With the establishment of the new undergraduate major in sustainable development, which was developed by Columbia College and the School of General Studies in conjunction with the Earth Institute, Pollack is also working with students, serving as an academic advisor to a group of ten undergraduates. He plans to host informal monthly group meetings with his advisees in an attempt to build a community with them, a unique format for this kind of interaction.

Pollack has been a professor of biological sciences at Columbia since 1978. He received the Alexander Hamilton Medal from Columbia University, the Gershom Mendes Seixas Award from the Columbia/Barnard Hillel, and held a Guggenheim Fellowship. He presented the Schoff Lectures at Columbia in 1998, which led to his third book, The Faith of Biology and the Biology of Faith. He received a B.A. in physics from Columbia College in 1961, and holds a Ph.D. in biology from Brandeis University. He has been a research scientist at the Weizmann Institute of Science, a senior scientist at Cold Spring Harbor Laboratory, an assistant professor of pathology at NYU Medical Center and an associate professor of microbiology at the State University of New York at Stony Brook.