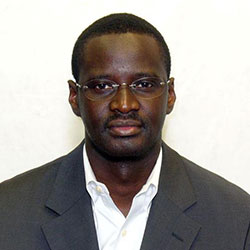 Mame Baba Cisse was inspired by one of the Intergovernental Panel on Climate Change’s predictions about global temperature increases to learn more about how such assessments are created and how they can be made more effective. This led him to enroll in the Master of Public Administration in Environmental Science and Policy (M.P.A. E.S.P.) program at Columbia University’s School of International and Public Affairs.

Cisse is from the West African country of Senegal and has worked for the Foreign Service of Senegal for over ten years. Before joining the M.P.A. E.S.P. program, Cisse participated in the preparatory process of the World Summit on Sustainable Development, held in Johannesburg in 2002. “The encounter with this universal body helped me to understand the complexity and inter-linkages of the many challenges faced by developing countries and the need for those countries not only to seek new sources to fund their development, but also to integrate the environmental dimension in their development policies for the sake of sustainability,” says Cisse. After his experience in that project, Cisse made a point to attend the majority of the United Nations Commission on Sustainable Development sessions.

In Fass, the village where his grandfather lives, about 200 miles from the capital of Dakar and with a population of just under a thousand, there is no hospital, no school and no electricity. Though it is too small to hold the community for meetings, the village’s mosque serves as the center of communal activity. But in 2007, the mosque was in bad disrepair. Cisse encouraged the people of the village to finance most of the repairs themselves and, with a grant of $10,000 from the Islamic Solidarity Fund to start them off, each head of household agreed to contribute the sale of 20 kilograms from his harvest toward the cause. Cisse also made sure to include women. Recognizing that the mosque would serve all citizens of the village, regardless of gender, Cisse saw to it that two of the seven people in the committee formed to oversee the renovation were women.

It was clear to Cisse that villagers in rural developing areas have the ability and motivation to take charge of their own futures. Cisse chose the M.P.A. E.S.P. program to give him the tools to help address challenges in his community. His firsthand familiarity with issues in the developing world, combined with the specialized knowledge he will glean from the M.P.A. E.S.P. program, will put Cisse in a strong position to effect changes in Senegal’s environmental policies.  After completing the program in May of 2011, Cisse plans to “go back in the Foreign Service of Senegal and make use of the knowledge and I skills I have learned at SIPA for the advancement of my country’s multilateral diplomacy in the field of environment.”

The M.P.A. E.S.P. program, which is jointly administered by the Earth Institute and the School of International and Public Affairs, appealed to Cisse because of its intense and structured curriculum, allowing him to take a short amount of time on leave from the Foreign Service, and because of “the diversity of the backgrounds” of the students. Cisse feels that the spectrum of academic and professional experience of students in the program “is really unique and most of the students have made great achievements in their respective fields,” which he hopes will broaden the scope of his understanding of environmental policy and the systems-based and interdisciplinary knowledge needed to meet the challenges of creating a more sustainable planet.

Cisse’s professional focus, as well as his decision to study in the M.P.A. E.S.P. program, reflect his drive. By earning a master’s degree in environmental science and policy, Cisse intends “to lay a solid foundation for greater expertise on environmental science and learn how policymakers in developing countries can make use of that science in the quest for sustainable development.”