If Water Runs Short, Some Regions May Suffer Significantly 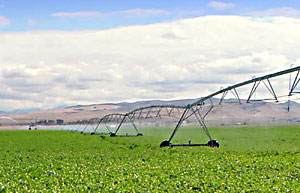 Irrigation can have a major cooling effect in some regions. Credit: U.S. Department of Agriculture.

Expanded irrigation has made it possible to feed the world’s growing billions—and it may also temporarily be counteracting the effects of climate change in some regions, say scientists in a new study. But some major groundwater aquifers, a source of irrigation water, are projected to dry up in coming decades from continuing overuse, and when they do, people may face the double whammy of food shortages and higher temperatures. A new study in the Journal of Geophysical Research pinpoints where the trouble spots may be.

“Irrigation can have a significant cooling effect on regional temperatures, where people live,” said the study’s lead author, Michael Puma, a hydrologist who works jointly with Columbia University’s Earth Institute and its affiliated NASA Goddard Institute for Space Studies. “An important question for the future is what happens to the climate if the water goes dry and the cooling disappears?  How much warming is being hidden by irrigation?”

Scientists generally agree that in the last century, humans have warmed the planet about .7 degrees C (about 1.3 degrees F) by pumping vast amounts of carbon dioxide into the air.  How much warmer earth will get depends not only on future carbon emissions but an array of other variables. For instance, earth’s oceans and vegetation have been absorbing a growing share of emissions, but recent studies suggest this uptake may be slowing.   This could lead to more carbon dioxide in the air, and accelerated warming. On the other hand, humans are also cooling the planet to some degree, by releasing air-polluting particles that lower temperatures by reflecting the sun’s energy back into space. Pumping of vast amounts of heat-absorbing water onto crops is lowering temperatures in some regions as well, say the authors.

Scientists are just beginning to get a handle on irrigation’s impact. In a hundred years, the amount of irrigated farmland has grown four-fold, now covering an area four times the size of Texas. Puma and his coauthor, Benjamin Cook, a climatologist at Goddard and Columbia’s Lamont-Doherty Earth Observatory, are the first to look at the historic effects of mass watering on climate globally by analyzing temperature, precipitation and irrigation trends in a series of model simulations for the last century. They found that irrigation-linked cooling grew noticeably in the 1950s as irrigation rates exploded, and that more rain is now falling downstream of these heavily watered regions.

In warm, dry regions, irrigation increases the amount of water available for plants to release into the air through a process called evapotranspiration. When the soil is wet, part of the sun’s energy is diverted from warming the soil to vaporizing its moisture, creating a cooling effect. The same process explains why drying off in the sun after a swim at the beach can be so refreshing.

Globally, irrigation’s effect on climate is small—one-tenth of one degree C (about 0.2 degree F).  But regionally, the cooling can match or exceed the impacts of greenhouse gases, say the scientists.  For example, the study found some of the largest effects in India’s arid Indus River Basin, where irrigation may be cooling the climate up to 3 degrees C, (5.4 degrees F) and up to 1-2 degrees C in other heavily irrigated regions such as California’s Central Valley and parts of China.  The study also found as much as .5 degree C cooling in heavily watered regions of Europe, Asia and North America during the summer.

The study suggests also that irrigation may be shaping the climate in other ways, by adding up to a millimeter per day of extra rain downwind of irrigated areas in Europe and parts of Asia.  It also suggests that irrigation may be altering the pattern of the Asian monsoon, the rains that feed nearly half of the world’s population. These findings are more uncertain, the authors caution, and will require further research.

“Most previous modeling studies were idealized experiments used to explore potential impacts, but this is a much more realistic simulation of the actual impacts,” said David Lobell, a Stanford University scientist who studies climate impacts on agriculture and was not involved in the study. “Their results show some interesting differences by time period and region that will lead to more research and contribute to more accurate simulations of future climate, particularly in agricultural areas.”

Irrigation has increased because it boosts crop yields, supporting many millions of small farmers, said Upmanu Lall, head of the Columbia Water Center at the Earth Institute.  But concern is growing that groundwater supplies in India and China may not keep up. “Near term and future climate predictions are essential for anticipating climate shocks and improving food security,” he said. “The study points to the importance of including irrigation in regional and global climate models so that we can anticipate precipitation and temperature impacts, and better manage our land, water and food in stressed environments.”