Advanced the Use of Sound Waves to Explore the Seabed

John Diebold, a marine scientist who sailed the world’s oceans for more than four decades using sound waves to study earthquake faults, underwater volcanoes and other normally hidden features of the seabed, died on July 1 at his home in Nyack, N.Y. The apparent cause was a heart attack, his family said; he was 66.

In 1967, Diebold was a college dropout with a thin resume of odd jobs and guitar-playing skills when he started doing semiskilled labor at Columbia University’s Lamont-Doherty Earth Observatory, in Palisades, N.Y., where he spent almost all his career. At that time, scientists were refining the sometimes dangerous job of sending sound waves to the seafloor and underneath it, and using the echoes to form images of what lay below. Such images, showing underlying sediments, rocks, faults and other features, became fundamental in studying the structure of the seabed, forming the modern theory of plate tectonics, and understanding earthquake hazards in many places. First put to work in the Lamont shop scaling rust off old winches and tapping out corroded screw holes, Diebold displayed an extraordinary knack for both mechanics and science. He went on to become a sought-after expert in understanding how sounds propagate through water and earth, helping pioneer methods and instruments commonly used today in a wide range of ocean research, and serving as chief scientist on many research ships around the world. 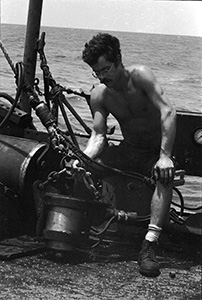 Diebold on the research vessel Conrad, 1969

John Brock Diebold was born on March 22, 1944, in New York City, and grew up mainly in the Hudson River villages of Nyack and nearby Piermont. His father was William Diebold, an economist; his mother was Janet Hart Sylvester, an attorney. After his parents divorced, he lived for a time with his mother in Washington, D.C., and North Carolina, but returned to Nyack to live with his father and stepmother, Ruth Diebold. He graduated from Nyack High School, but dropped out of Cornell University, then studied filmmaking at City College of New York and fruitlessly searched for film work. He also spent a great deal of time playing blues, bluegrass and jug-band music, influenced by guitar players like Leadbelly, Mississippi John Hurt, Rev. Gary Davis and other icons of the 1960s Greenwich Village folk scene. Lamont, situated near his childhood home, ran research vessels that roamed the globe continuously, and he ended up being drawn there. “The circus came to town only infrequently—but Lamont was always there, seductively offering the chance of running away to sea,” Diebold wrote in a memoir posted on his website.

After a stint in the crowded warren of sheds and trailers where workers fabricated and fixed Lamont’s seagoing instruments, Diebold was sent on 20-month cruise on the research vessel Conrad that covered much of the world. He helped take gravity readings, send down cameras to photograph the deep seafloor, pull up cores of sediment, and—his eventual specialty—work instruments that fired pulses of sound into the seafloor and read the echoes that bounced back. These were used to form images of the seabed at depths of up to several miles, and thousands of feet beneath the seabed itself.

At the time, Diebold’s seniors, who included the great 20th-century oceanographer Maurice Ewing, had started designing and refining “airguns” that generated the sound by releasing pulses of compressed air—a method that quickly became the standard. However, to generate sufficient energy in the deepest waters, they still depended on the old-fashioned way: tossing explosives over the side. This was one of Diebold’s early jobs—one he did very carefully, considering the death by explosion of a predecessor a few years before. “I have never found another task that held my attention quite the way that cutting fuse, crimping blasting caps, strapping together blocks of high explosives, lighting the fuse, and dropping the charges over the rail did,” he wrote. “Timing was always important.” He once estimated that he personally detonated some 50 tons of surplus World War II explosives on the job. When they forgot to load blasting caps for one leg off Japan, he dutifully studied a way to set off the explosions by harvesting chemicals from a box of .45 caliber pistol rounds that Ewing handed him, but soon dissuaded his boss from pursuing the scheme.

Diebold eventually graduated from the University of Colorado, returned to Lamont in 1974, and earned a PhD. in geophysics from Columbia. Putting the era of explosives firmly behind, he became an important force in advancing the use of airguns, helping design, test and refine arrays of the sound-generating devices, the hydrophones for receiving the signals they returned, and the complex software for processing the data into useful imagery. Under his guidance and that of colleagues, these so-called seismic arrays evolved into gigantic affairs, involving dozens of microphones trailing as much as six kilometers (four miles) behind vessels, and reading dozens of sound frequencies simultaneously to show detailed three-dimensional pictures of the sub-seabed.

“He was an unusual individual in that he was not only a research scientist of international repute, but he enjoyed a special aptitude for things mechanical, a gift that most scientists don’t carry with them,” said Dennis Hayes, a senior research scientist at Lamont who, with others at Lamont, mentored Diebold. Robert Detrick, director of the earth sciences division of the U.S. National Science Foundation, who sailed repeatedly with him, called Diebold “one of the world’s authorities on airguns,” and said his work made possible their use for academic science. In contrast with some of his more intense colleagues, Diebold was also known for his easygoing pursuit of fun, which included chili-making competitions, singing, and his design for bran-filled beanbags designed to be juggled. “He was one guy you definitely wanted on your team when you went to sea,” said Hayes. 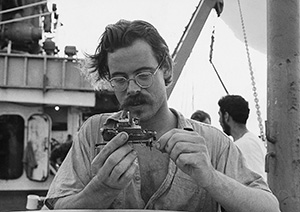 In the 1990s, Diebold estimated that his time on research vessels added up to at least six years at sea, crisscrossing the Pacific, Atlantic, Indian Arctic and Antarctic oceans, and most of the world’s seas. Among many other projects, he helped investigate underwater volcanoes in the eastern Pacific; the development of ancient ice sheets along Antarctica’s Ross Sea; and the evolution of ocean floors off China, Australia, Alaska and Venezuela. He helped lead initial attempts to map the subsurface bed of the Hudson River, and in 2008 participated in an expedition in the Sea of Marmara to gather images of the North Anatolian Fault, an active underwater structure that seismologists fear will shake Istanbul disastrously in coming years. From such voyages, Diebold contributed to more than 60 scientific papers. In his spare time, he also wrote freelance articles about personal computing, and gave occasional public concerts with his longtime group, the American Standard String Band.

Diebold’s last major project was a cruise this March along the northern coast of Haiti, to image the undersea portion of the great fault that shook the capital of Port-au-Prince on Jan. 12, killing over 200,000 people. The results of this project, carried out by five institutions, are not yet published, but they are expected to help clarify the mechanics and history of the fault, and help scientists understand where future quakes may come. The ship also delivered relief supplies to Port-au-Prince. As usual, Diebold brought along his guitar. Cecilia McHugh, a Lamont seismologist who served as chief scientist on the cruise, said he could be seen at sunset on the fantail of the ship, making music. Then, he returned to work: with the team working the airguns around the clock to gather data, he had taken the midnight shift to monitor the equipment.