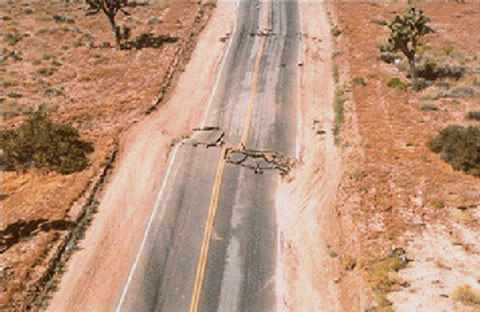 Scientists have well established that big earthquakes can trigger other big quakes by transferring stress along a single fault, as successive earthquakes in Turkey and Indonesia have shown. But some powerful quakes can set off other big quakes on faults tens of kilometers away, with just a tiny nudge, says a new paper. Christopher Scholz, a seismologist at Columbia University’s Lamont-Doherty Earth Observatory, explains how: the faults are already synchronized, he says.

Scholz argues in the most recent issue of the Bulletin of the Seismological Society of America that when a fault breaks, it may sometimes gently prod a neighboring fault also on the verge of fracturing.  The paper finds evidence for synchronized, or “phase locked,” faults in southern California’s Mojave Desert, the mountains of central Nevada, and the south of Iceland. Drawing on earthquake patterns as far back as 15,000 years, the paper identifies strings of related earthquakes, and explains the physics of how faults separated by up to 50 kilometers, and rupturing every few thousand years, might align themselves to rupture almost simultaneously.

“All of a sudden bang, bang, bang, a whole bunch of faults break at the same time,” says Scholz. “Now that we know that some faults may act in consort, our basic concept of seismic hazard changes.  When a large earthquake happens, it may no longer mean that the immediate future risk is lower, but higher.” 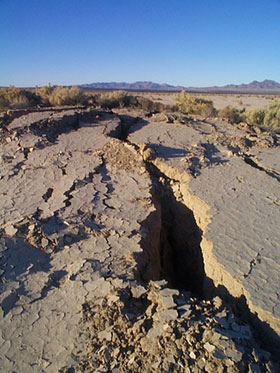 The Landers quake may have triggered another big quake, seven years later, at Hector Mine near Joshua Tree National Park. (Credit: University of California, San Diego)

The idea of independent events synchronizing themselves goes back to the Age of Discovery and the pendulum clock, invented as scientists and navigators were searching for a device to measure longitude at sea. In 1665, Christiaan Huygens, the Dutch mathematician who invented the pendulum clock (a dead end, it turned out, in solving the longitude problem) first described how the pendulums of two clocks hanging from the same wall became synchronized. Known as entrainment, or coupled oscillation, this phenomenon is caused by the motion of the two pendulums communicating through the beam supporting the clocks.

Entrainment can also happen when faults lie relatively close, between 10 and 50 kilometers apart, and are moving at comparable speeds, Scholz says. As faults break successively over time, their cycles may eventually fall in sync, a process described in the paper by the mathematical “Kuramoto Model.”

The paper provides real-world examples from places where geologists and seismologists have compiled a long record of past quakes. In the Mojave Desert, the Camp Rock fault, a secondary fault off the San Andreas, ruptured in 1992, causing a magnitude 7.3 quake in the town of Landers, killing one child. Seven years later, the Pisgah fault, 24 kilometers away, broke, causing a magnitude 7.1 quake at Hector Mine, inside the Twentynine Palms Marine Corps Base.

When a fault ruptures in a large earthquake, the movement releases stresses that may have built up over millennia.  But the movement also transfers a small amount of that stress, usually a fraction of a percent, to nearby faults.  In order for that tiny added stress to trigger a large earthquake on a nearby fault, that fault had to already be very near its breaking point, says Scholz.  For the two faults to have been simultaneously near their breaking points requires them to be synchronized in their seismic cycles.

Paleoseismology—that is, studies of the physical signs left by past earthquakes-- show that the Mojave faults rupture every 5,000 years or so, so the relatively short seven-year lag between the Landers and Hector Mine quakes suggested to Scholz the timing could not be random. When he looked at the paleoseismological record, he saw that both faults had ruptured together before, at about 5,500 years ago and 10,000 years ago. He noticed a similar trend with the nearby Lenwood and Helendale faults, which had ruptured together 1,000 years ago and 9,000 years ago. And, the two fault pairs happened to be moving at virtually the same pace, 1 millimeter and .8 millimeter, respectively.

He noticed a similar trend in Nevada. In the summer of 1954, the Rainbow Mountain fault system was hit by five earthquakes ranging in magnitude from 5.5 to 6.8. The action culminated on Dec. 16 with a 7.1 quake on Fairview Peak and a 6.8 quake four minutes later on the Dixie Valley fault, 40 kilometers away. Again, the triggering stress was a small fraction of a percent. Paleoseismic evidence showed that similar groups of faults nearby had produced clusters of earthquakes every 3,000 years or so over the last 12,000 years.

The same pattern emerged in Iceland. In June 2000, two quakes--magnitudes 6.5 and 6.4-- struck within four days of each other on parallel faults 14 kilometers apart. In 1896, five large quakes struck on different neighboring faults within 11 days of each other, with similar clusters occurring in 1784, and from 1732 to 1734.

However, seismologists have yet to come up with a reliable method for predicting imminent earthquakes; the best they can do so far is to identify dangerous areas, and roughly estimate how often quakes of certain sizes may strike.

Ross Stein, a geophysicist at the U.S. Geological Survey, who was not involved in the study, questioned the paper’s wider significance. There is “good” evidence for historic earthquake sequences, and “possible” evidence for prehistoric sequences, he said, but those quakes make up a minority of earthquake events.