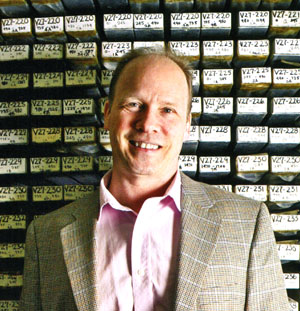 As a young undergraduate, Peter deMenocal once wandered the halls of the Woods Hole Oceanographic Institution, where he met Charlie Hollister, a well-known and charismatic marine geologist. Charlie invited him into his large office and recounted his life as an oceanographer: travel to distant ports, research on the open ocean, rigorous science and the thrill of discovery. Initially majoring in math and studio art, deMenocal decided this was the life for him, and a more practical one at that, and changed plans to become an oceanographer. Since then, deMenocal has become a prominent research scientist in the fields of paleoceanography and marine geology. He is also a highly esteemed professor at Columbia University, as evidenced by his 2008 Lenfest Distinguished Columbia Faculty Award, which he received for excellence in teaching and scholarship.

Building on the foundations laid by Lamont elders such as Wally Broecker, deMenocal uses geochemical analyses of marine sediments to understand past changes in ocean circulation and terrestrial climates. His current research uses stable isotopic and other geochemical analyses of marine sediments to understand how and why past climates have changed, with a specific interest in placing contemporary climate change trends within the context of climate changes during the prehistoric past. Current areas of research include: stability of warm climate periods, African monsoonal climate, ancient cultural responses to rapid climate change, and the role of climate change in the evolution of early human ancestors.

Professor deMenocal has received several research awards throughout his Columbia career as a faculty member and, previously, a Ph.D. student, including the Bruce Heezen Award for excellent graduate research at the Lamont-Doherty Earth Observatory in 1989, the Flint Lectureship at Yale in 2006, and the Elsevier Top 50 highly cited paper award in 2007 for his paper “African Climate Change and Faunal Evolution During the Pliocene-Pleistocene,” published in Earth and Planetary Science Letters. In addition to his award-winning paper on African climate change and faunal evolution, deMenocal cites the following works that he co-authored as representative of his work: “The Pliocene Paradox: Mechanisms for a Permanent El Nino,” published in Science in 2006; “Biomarker Records of Late Neogene Changes in Northeast African Vegetation,” published in Geology in 2005; and “Cultural Responses to Climate Change During the Late Holocene” published in Science in 2001.

As a professor and vice chair in the Department of Earth and Environmental Sciences at Columbia University, deMenocal teaches graduate courses related to his research, in addition to the undergraduate courses Frontiers of Science and Science and Society. He says of his experience teaching the Columbia core course Frontiers of Science: “It’s one of the most exciting teaching opportunities for me because I have access to one thousand incredibly bright students. We really do give them the frontier of research, and I think the students appreciate being given an inside track on what they certainly think is relevant.”