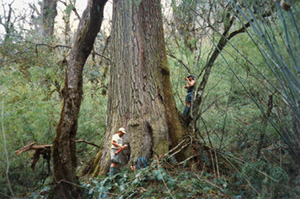 The seasonal monsoon rains in Asia feed nearly half the world’s population, and when the rains fail to come, people can go hungry, or worse. A new study of tree rings provides the most detailed record yet of at least four epic droughts that have shaken Asia over the last thousand years, from one that may have helped bring down China’s Ming Dynasty in 1644, to another that caused tens of millions of people to starve to death in the late 1870s. The study, published this week in the journal Science, is expected not only to help historians understand how environment has affected the past, but to aid scientists trying to understand the potential for large-scale disruptions of weather in the face of changing climate.

By sampling the wood of thousands of ancient trees across Asia, scientists at Columbia University’s Lamont-Doherty Earth Observatory assembled an atlas of past droughts, gauging their relative severity across vast expanses of time and space. “Global climate models fail to accurately simulate the Asian monsoon, and these limitations have hampered our ability to plan for future, potentially rapid and heretofore unexpected shifts in a warming world,” said Edward Cook, head of Lamont’s Tree Ring Lab, who led the study. “Reliable instrumental data goes back only until 1950. This reconstruction gives climate modelers an enormous dataset that may produce some deep insights into the causes of Asian monsoon variability.”  There is some evidence that changes in the monsoon are driven at least in part by cyclical changes in sea-surface temperatures. Some scientists have speculated that warming global temperatures could alter these cycles and possibly make some of them more intense, but at this point there is no consensus on whether or how they might change.

For some tree species, rainfall determines the width of their annual growth rings, and these rings are what the scientists were able to read. The researchers spent more than 15 years traveling across Asia to locate trees old enough to provide long-term records. The hunt took them to more than 300 sites, from Siberia down to Indonesia and northern Australia, as far west as Pakistan and as far east as Japan. The project involved collaborations with numerous national governments, local villages and other university scientists. “It’s everything from low-land rain forests to high in the Himalayas,” said study coauthor Kevin Anchukaitis, a Lamont tree ring scientist. “You have a tremendous diversity of environment, climate influences and species.”

The tree-ring records in the study reveal at least four great droughts that are linked to catastrophic events in history. For starters, the study suggests that climate may have played a powerful role in the 1644 fall of China’s Ming dynasty. The tree rings provide additional evidence of a severe drought in China referenced in some historical texts as the worst in five centuries. This study narrows it down to a three-year period, 1638-1641. The drought was most sharply expressed in northeastern China, near Beijing, and is thought to have influenced peasant rebellions that hastened the demise of the Ming. 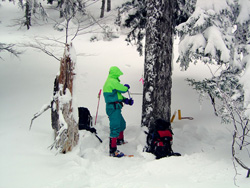 Another severe monsoon failure came in 1756-1768, coinciding with the collapse of kingdoms in what are now Vietnam, Myanmar and Thailand. The drought roiled political structures all the way to Siberia, and the tree rings also indicate that western India was severely affected. This drought is not documented in historical records; scientists first identified it in teak rings from Thailand, and later in Vietnamese cypress trees. Some historians have speculated that climate must have played a role for such sweeping political changes to have happened simultaneously; fragmentary accounts suggest that dry periods may have been punctuated with devastating floods.  The study appears to provide an explanation for the so-called “strange parallels” that Victor Lieberman, an historian at the University of Michigan, has spent his career studying. “It provides confirmation that there are very strong climate links between monsoon regimes in India, Southeast Asia and southern China,” said Lieberman in an interview.

Then, the so-called East India drought hit in 1790-1796. This one appears to have been felt worldwide, spreading civil unrest and socioeconomic turmoil. For instance, in Mexico, water levels at Lake Pátzcuaro fell so much they gave rise to ownership disputes over the land that emerged. In Europe, drought led to crop failures that preceded the French Revolution. Famines hit India.

Perhaps the worst drought, the scientists found, was the Victorian-era “Great Drought” of 1876-1878. The effects were felt across the tropics; by some estimates, resulting famines killed up to 30 million people. According to the tree-ring evidence, the effects were especially acute in India, but extended as far away as China and present-day Indonesia. Colonial-era policies left regional societies ill-equipped to deal with the drought’s consequences, as historian Mike Davis details in his book Late Victorian Holocausts. Famine and cholera outbreaks at this time in colonial Vietnam fueled a peasant revolt against the French. 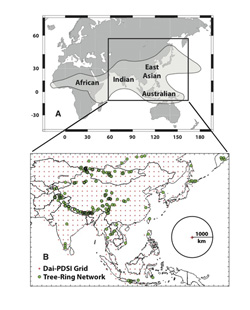 Monsoon rains touch a huge part of the world. Lamont scientists crossed most of Asia to sample sites (green dots) to reconstruct past droughts.

The study follows a related report last month by the Lamont tree-ring team suggesting that dramatic variations in the monsoon may have influenced the collapse of the ancient Khmer civilization at Angkor nearly 600 years ago, in what is now Cambodia. That paper, appearing in the Proceedings of the National Academy of Sciences, showed evidence of a mega-drought in the wider region around Angkor from the 1340s to the 1360s, followed by a more severe but shorter drought from the 1400s to 1420s. The droughts were interspersed with severe flooding, and the kingdom collapsed shortly after. The scientist who led that study, Brendan Buckley, coauthored the present drought atlas.

Scientists aren’t exactly sure how factors such as volcanic eruptions, greenhouse gases and variations in solar output combine to drive the many variations in the monsoon over the long term. Over shorter time periods, variations seem to be more closely linked to the El Niño-Southern Oscillation (ENSO), the warming and cooling of the tropical Pacific atmosphere-ocean system. Separate studies suggest that El Niño, the warm phase of ENSO, often coincides with a weak monsoon and droughts; it also seems linked to weather changes in Africa and parts of South America. The deadly 1876-1878 drought coincided with one of the most extreme El Niños of the last 150 years. However, the parallels are not perfect, so other factors may come into play at different times, including changes in snow cover over Asia and cycles of sea-surface temperature in the Indian Ocean. There is intense interest in how El Niño and other phenomena may be affected by a warming climate, and how monsoon extremes may affect the growing populations that depend on the rains.  Southern China is currently suffering its worst drought in 80 to 100 years, bringing not only water shortages, but tensions with Southeast Asian nations downstream of its watersheds.

Data from the drought atlas is already providing information on particular regions, say the scientists. Using the Indonesia tree ring records, for example, Lamont scientist and study coauthor Rosanne D’Arrigo has reconstructed stream flow in Java’s Citarum river basin, a region that waters much of Indonesia’s rice. In a recent study in the journal Climate Dynamics, D’Arrigo found a close link between El Niños and weak monsoon rains or drought in Indonesia over the last 250 years.

The atlas is valuable to monsoon forecasters because the record is long enough and the spatial areas detailed enough that modelers can pick out short-term and long-term patterns, said Bin Wang, a meteorologist and monsoon modeler at the University of Hawaii who was not involved in the study. “It is extremely valuable for validating climate models’ simulation and understanding their origins in terms of model physics,” he said.