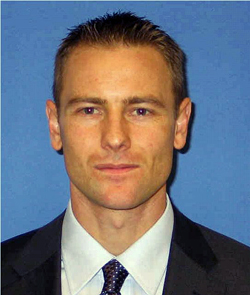 Joseph Raser GS’11 knows that dreams can take you in unpredictable directions. Before he discovered his passion for sustainable development, Raser served in the United States Army as a non-commissioned airborne forward officer stationed in Italy. In 2008, he was sent to Siuna, Nicaragua, on a medical and economic mission. This experience, which was followed by further work in impoverished Nicaraguan communities, sparked Raser’s interest in the fast-growing field of sustainable development.

Today, Raser is an undergraduate at Columbia University’s School of General Studies, with a major in mathematics-economics and a special concentration in sustainable development. He became interested in Columbia and the cutting-edge research of the Earth Institute after reading books by Jeffrey Sachs, including “The End of Poverty” and “Common Wealth.” His goal is to learn, through the special concentration in sustainable development, how to apply quantitative systems to solve real-life problems.

Last summer, Raser got a chance to do just that in Tokyo, Japan, where he participated in the Global Seminar at Waseda University’s Global Honors College. At the conference, teams of students researched and formulated policy responses to case studies in sustainability. Raser’s team worked on bus rapid transit, highlighting its economic, social and environmental benefits, and explaining the viability of its implementation in developed and developing urban areas worldwide. For Raser, the conference provided an exciting opportunity to make a real contribution to the field of sustainability while still an undergraduate.

Raser’s efforts exemplify the drive of students in Columbia’s undergraduate sustainable development program to make a positive impact on the world. A unique strength of this concentration is the students’ diversity of academic interests; they bring a variety of perspectives to each problem-solving scenario. “Our program strives to reach students from a variety of traditional disciplines, backgrounds and life experiences to facilitate as broad and far-reaching a discussion as possible,” says Kevin Griffin, interim program director. Moreover, the professors represent an incredible research team and are able to bring their own cutting-edge contributions and insights to each class. For Raser, regularly seeing his professors’ names appear in publications like The Economist is a reminder of the high quality of the education he is receiving.

Overall, Raser values the unique perspectives he has gained on a variety of fields that he would not have been exposed to in his major. Looking toward the future, he hopes to further investigate the process of quantifying negative externalities for companies in order to develop a system of environmental accountability. The sustainable development program, he explains, will provide him with the real-world tools that he needs to evaluate these situations and to discern which environmental decisions are, and are not, sustainable.