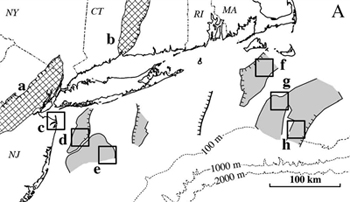 Scientists say buried volcanic rocks along the heavily populated coasts of New York, New Jersey and New England, as well as further south, might be ideal reservoirs to lock away carbon dioxide emitted by power plants and other industrial sources. A study this week in the Proceedings of the National Academy of Sciences outlines formations on land as well as offshore, where scientists from Columbia University’s Lamont-Doherty Earth Observatory say the best potential sites may lie.

Underground burial, or sequestration, of globe-warming carbon dioxide is the subject of increasing study across the country. But up till now, research in New York has focused on inland sites where plants might send power-plant emissions into shale, a sedimentary rock that underlies much of the state. Similarly, a proposed coal-fired plant in Linden, N.J. would pump liquefied CO2 offshore into sedimentary sandstone. The idea is controversial because of fears that CO2 might leak. By contrast, the new study targets basalt, an igneous rock, which the scientists say offers significant advantages.

Some basalt on land is already well known and highly visible. The vertical cliffs of the Palisades, along the west bank of the Hudson River near Manhattan, are pure basalt. The formation, created some 200 million years ago, extends into the hills of central New Jersey, and similar masses are found in central Connecticut. Previous research by Lamont scientists and others shows that carbon dioxide injected into basalt undergoes natural chemical reactions that will eventually turn it into a solid mineral resembling limestone. If the process were made to work on a large scale, this would help obviate the danger of leaks.

The study’s authors, led by geophysicist David S. Goldberg, used existing research to outline more possible basalt underwater, including four areas of more than 1,000 square kilometers each, off northern New Jersey, Long Island and Massachusetts. A smaller patch appears to lie more or less under the beach of New Jersey’s Sandy Hook peninsula, opposite the New York City harbor and not far from the proposed plant in Linden. The undersea formations are inferred from seismic and gravity measurements. “We would need to drill them to see where we’re at,” said Goldberg. “But we could potentially do deep burial here. The coast makes sense. That’s where people are. That’s where power plants are needed. And by going offshore, you can reduce risks.”  Goldberg and his colleagues previously identified similar formations off the U.S. Northwest. 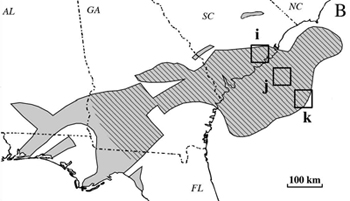 Goldberg said the undersea formations are potentially most useful, for several reasons. For one, they are deeper—an important factor, since CO2 pressurized into a liquid would have to be placed at least 2,500 feet below the surface for natural pressure to keep it from reverting to a gas and potentially then making its way back to the surface. The basalts on land are relatively shallow, but those at sea are covered not only by water, but hundreds or thousands of feet of sediment, and they appear to extend far below the seabed. In addition to providing pressure, sediments on top would form impermeable caps, said Goldberg. The basalts are thought to contain porous, rubbly layers with plenty of interstices where CO2 could fit, simply by displacing seawater. Theoretically, after morphing into a solid, the CO2 would fill those voids. On land, the same reaction might take place, but it is possible that drilling and injection could disturb aquifers or otherwise disturb neighbors on the heavily populated surface.

The scientists estimate that just the small Sandy Hook basin may contain about seven cubic kilometers of the rock, with enough pore space to hold close to a billion tons of CO2—the equivalent of the emissions from four 1-billion-watt coal-fired plants over 40 years. “The basalt itself is very reactive, and in the end, you make limestone,” said coauthor Dennis Kent, who is also at Rutgers University. “It’s the ultimate repository.”

Previous research has identified other areas of basalt sprinkled along the Appalachians. The largest mass of all appears to extend offshore of Georgia and South Carolina, as well as inland. This coast also is populous, and would make a good target, said Goldberg. “The next step would be to get some exploratory surveying and drilling going,” he said. The paper suggests a half-dozen spots around New York including the Sandy Hook area, and three off South Carolina, to start with.

The study was also coauthored by geologist and paleontologist Paul Olsen, who has been involved in drilling basalt formations in New Jersey.  Preliminary drilling also has been done at Lamont-Doherty Earth Observatory itself, which sits atop the basalt cliffs on the Hudson River’s west bank.