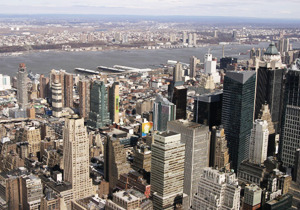 As world leaders gather at the Copenhagen climate summit, New York City is working on ways to respond to expected heat waves and sea-level rise. A strategy devised by 15 experts, including eight from Columbia’s Earth Institute, will be published in the Annals of the New York Academy of Sciences in January.

The report comes from the New York City Panel on Climate Change (NPCC), appointed by Mayor Michael Bloomberg from experts in academia and industry, to provide technical and scientific expertise to the city’s Climate Change Adaptation Task Force, which will develop an adaptation plan.

It includes projections of regional climate, how critical infrastructure may be affected, and overviews of legal and insurance perspectives. It encourages development of what it calls “flexible adaptation pathways”—strategies that can evolve through time along with the climate, and the needs of the city.

“We took all the global climate models—about 18 of them—and we looked to see what they are projecting for New York City,” said NPCC co-chair Cynthia Rosenzweig, a scientist with Columbia’s Center for Climate Systems Research and head of the Climate Impacts Group at the NASA Goddard Institute for Space Studies, both part of the Earth Institute. For one, she said, the city could be up to 5 degrees hotter by 2050 than it is now. “What people really react to is heat waves, and they are very likely to become more frequent,” she said. According to the analysis, the city may experience a four-fold increase of 90-degree-plus days by the end of the century. This will potentially affect public health and demands on infrastructure including electricity water supply.

NPCC researchers also predict that New Yorkers can expect to see at least two feet of sea level rise by the 2080s. “Keeping a close eye on melting from the Greenland and West Antarctic ice sheets, we project that rapid melt could lead us to what we call a ‘rapid ice-melt scenario,’—an increase of up to four feet in sea level by the end of the century,” said Rosenzweig. This poses significant risks not only to low-lying neighborhoods, but to water, transport and other systems, says the report.

While it is difficult for scientists to know with absolute certainty just how climate change will affect the city, preparing for uncertainty is a central part of making the city more resilient, said Rosenzweig.

The NPCC members recommend establishment of a long-term monitoring program to track and analyze key factors, and a partnership with the insurance industry to facilitate the use of risk-sharing mechanisms.

“The NPCC report reflects a maturation of how we look at climate change—it’s no longer something that will appear only sometime in the distant future,” said William Solecki, NPCC co-chair and head of the Institute for Sustainable Cities at The City University of New York. “Climate change is here, and it’s going to be here for the foreseeable future.”