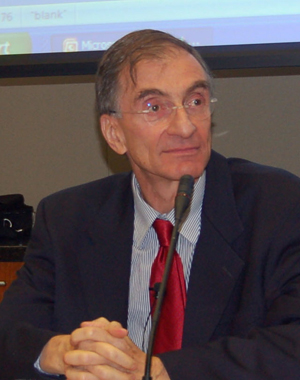 It has been a long time since humans thought of themselves as the prey of other species. But when Joel Cohen summarizes his research, it makes a person think twice about his or her comfortable perch at the top of the food chain. “I focus on human relations with the species we eat (agriculture) and on human relations with the species that eat us (infectious diseases),” says Cohen.

Cohen’s fields of interest are demography, ecology, epidemiology, infectious diseases, mathematical models, population genetics and public health. In his book “How Many People Can the Earth Support?” he examined how the interaction of natural constraints with human choices affects the Earth’s human carrying capacity. Cohen says, “For me, the most exciting aspect of my research is the three-way interplay among theoretical ideas, empirical observations and data-analytical methods. I am trying to understand better the place of the human species in the community of species with which we share this planet.”

Because ecological communities strongly affect human well-being, Cohen’s research extends to nonhuman species as well. The food web is a flowchart of who eats whom that describes the major pathways of food energy and of chemical and biological toxins in a community of multiple species. Cohen and colleagues developed a new food web graph, which plots species and feeding links in a way that incorporates species abundance and body size. Many descriptions of community structure can be derived from this data structure. Cohen and colleagues analyzed data on soil food webs at 146 sites in the Netherlands to understand how environmental variables, human land uses and below-ground food webs interact.

Cohen believes a major challenge in the coming decades is to understand how demographic, economic and cultural changes will interact with Earth’s physical, chemical and biological environments.  “I am convinced that a better understanding of how the natural world works, including the roles of humans in the natural world, is a key to long-term human well-being,” he says, “and I hope that my work and the work of my laboratory will contribute in the short- and long-term to human well-being.”

To this end, his lab has analyzed the spatial distribution of Earth’s human population in relation to geophysical factors such as elevation, distance from coasts or navigable rivers, temperature and precipitation. The lab’s work has included the development of spatially explicit mathematical models of Chagas disease transmission in Argentina to improve interventions and disease control.

Cohen was a MacArthur Foundation Fellow and he is a member of the National Academy of Sciences and the Board of Trustees of the Population Reference Bureau. He served on the Board of Directors of the Nature Conservancy from 2000 to 2009 and co-chaired its Science Council. He shared the Tyler Prize for Environmental Achievement in 1999. In 1998, the Fred L. Soper Prize of the Pan American Health Organization recognized the work he had done with his colleagues on Chagas disease.