Oceans' Uptake of Manmade Carbon May Be Slowing 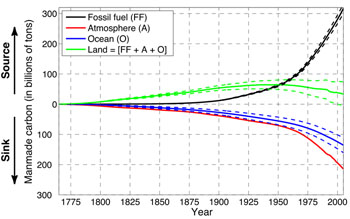 (Click on image to view larger version)
Carbon released by fossil fuel burning (black) continues to accumulate in the air (red), oceans (blue), and land (green). The oceans take up roughly a quarter of manmade CO2, but evidence suggests they are now taking up a smaller proportion.
Credit: Samar Khatiwala, Lamont-Doherty Earth Observatory.

The oceans play a key role in regulating climate, absorbing more than a quarter of the carbon dioxide that humans put into the air. Now, the first year-by-year accounting of this mechanism during the industrial era suggests the oceans are struggling to keep up with rising emissions—a finding with potentially wide implications for future climate. The study appears in this week’s issue of the journal Nature, and is expanded upon in a separate website.

The researchers estimate that the oceans last year took up a record 2.3 billion tons of COâ‚‚ produced from burning of fossil fuels. But with overall emissions growing rapidly, the proportion of fossil-fuel emissions absorbed by the oceans since 2000 may have declined by as much as 10%.

Some climate models have already predicted such a slowdown in the oceans’ ability to soak up excess carbon from the atmosphere, but this is the first time scientists have actually measured it. Models attribute the change to depletion of ozone in the stratosphere and global warming-induced shifts in winds and ocean circulation. But the new study suggests the slowdown is due to natural chemical and physical limits on the oceans’ ability to absorb carbon—an idea that is now the subject of widespread research by other scientists.

“The more carbon dioxide you put in, the more acidic the ocean becomes, reducing its ability to hold COâ‚‚” said the study’s lead author, Samar Khatiwala, an oceanographer at Columbia University’s Lamont-Doherty Earth Observatory. “Because of this chemical effect, over time, the ocean is expected to become a less efficient sink of manmade carbon. The surprise is that we may already be seeing evidence for this, perhaps compounded by the ocean’s slow circulation in the face of accelerating emissions.”

The study reconstructs the accumulation of industrial carbon in the oceans year by year, from 1765 to 2008. Khatiwala and his colleagues found that uptake rose sharply in the 1950s, as the oceans tried to keep pace with the growth of carbon dioxide emissions worldwide. Emissions continued to grow, and by 2000, reached such a pitch that the oceans have since absorbed a declining overall percentage, even though they absorb more each year in absolute tonnage. Today, the oceans hold about 150 billion tons of industrial carbon, the researchers estimate--a third more than in the mid-1990s.

For decades, scientists have tried to estimate the amount of manmade carbon absorbed by the ocean by teasing out the small amount of industrial carbon—less than 1 percent—from the enormous background levels of natural carbon. Because of the difficulties of this approach, only one attempt has been made to come up with a global estimate of how much industrial carbon the oceans held—for a single year, 1994.

Khatiwala and his colleagues came up with another method.  Using some of the same data as their predecessors— seawater temperatures, salinity, manmade chlorofluorocarbons  and other measures—they developed a mathematical technique to work backward from the measurements to infer the concentration of industrial carbon in surface waters, and its transport to deep water through ocean circulation. This allowed them to reconstruct the uptake and distribution of industrial carbon in the oceans over time.

Their estimate of industrial carbon in the oceans in 1994—114 billion tons—nearly matched the earlier 118 billion-ton estimate, made by Chris Sabine, a marine chemist at the National Oceanic and Atmospheric Organization in a 2004 paper in the journal Science.

Sabine, who was not involved in the new study, said he saw some limitations. For one, he said, the study assumes circulation has remained steady, along with the amount of organic matter in the oceans.  “That being said, I still think this is the best estimate of the time variance of anthropogenic COâ‚‚ in the ocean available,” said Sabine. “Our previous attempts to quantify anthropogenic COâ‚‚ using ocean data have only been able to provide single snapshots in time.”

About 40 percent of the carbon entered the oceans through the frigid waters of the Southern Ocean, around Antarctica, because carbon dioxide dissolves more readily in cold, dense seawater than in warmer waters. From there, currents transport the carbon north. “We’ve suspected for some time that the Southern Ocean plays a critical role in soaking up fossil fuel COâ‚‚,” said Khatiwala. “But our study is the first to quantify the importance of this region with actual data.

The researchers also estimated carbon uptake on land, by taking the known amount of fossil-fuel emissions and subtracting the oceans’ uptake and the carbon left in the air. They were surprised to learn that the land may now be absorbing more than it is giving off.

They say that until the 1940s, the landscape produced excess carbon dioxide, possibly due to logging and the clearing and burning of forests for farming. Deforestation and other land-use changes continue at a rapid pace today—but now, each year the land appears to be absorbing 1.1 billion tons more carbon than it is giving off.

One possible reason for the reversal, say the researchers, is that now, some of the extra atmospheric carbon—raw material for photosynthesis--may be feeding back into living plants and making them grow faster. “The extra carbon dioxide in the atmosphere may be providing a fertilizing effect,” said study coauthor Timothy Hall, a senior scientist at NASA’s Goddard Institute for Space Studies.  Many other scientists are now working to determine the possible effects of increased carbon dioxide on plant growth, and incorporate these into models of past and future climates.

Khatiwala says there are still large uncertainties, but in any case, natural mechanisms cannot be depended upon to mitigate increasing human-produced emissions. “What our ocean study and other recent land studies suggest is that we cannot count on these sinks operating in the future as they have in the past, and keep on subsidizing our ever-growing appetite for fossil fuels,” he said.

In a related paper in Nature, Khatiwala describes how the research was done.

Watch a Movie of the Oceans Filling with CO2