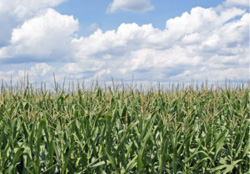 The United States is the world’s largest producer of corn.

Three of the most important crops produced in the United States—corn, soybeans and cotton—are predicted to suffer declines of as much as 80 percent if temperatures continue to rise with manmade climate change, says a new study.

In recent years, experts have debated whether human-induced global warming will cause crops to suffer or flourish, depending on the region and the crop. The new study, coauthored by economist Wolfram Schlenker of Columbia University’s School of International and Public Affairs, and agricultural economist Michael Roberts of North Carolina State University, shows that in the United States, yields for these major crops may increase gradually with more warm days, but would then fall precipitously after reaching crop-specific temperature ceilings. The study appears in the Proceedings of the National Academy of Sciences.

If such declines take place, they would reverberate globally, as many developing countries depend on food exports from the United States.

“Our findings show that temperature increases are beneficial only for yields up to approximately 86° F,” said Schlenker. “Current crop varieties are very sensitive to temperature increases above this temperature. The problem is that the damaging effects from additional days with temperatures above 86° F far outweigh the benefits from warming below it.”  The United States is the world’s largest producer and exporter of corn and soybeans.

Schlenker said that, under conservative global warming scenarios, U.S. crop yields would decrease by 30 to 46 percent over the next century. Under a more rapid warming scenario, these crops could experience 63 to 82 percent failures. Previous studies, including a set of 2007 papers coauthored by researchers at Columbia’s Earth Institute, have projected that warming climate will damage crops in many regions of the world, due not only to temperature thresholds, but increased droughts, floods and spread of diseases.

The scenarios used in the new study were taken from climate models used by the Intergovernmental Panel on Climate Change. The researchers combined these with new fine-scale weather data merged with information on crop yields spanning most U.S. counties from 1950 to 2005. The new data focuses on the length of time each crop is exposed to every one-degree Celsius temperature interval in each day. This was then tallied across all days of the growing season for specific locations within each U.S. county where crops are grown. The analysis revealed that days with more temperature variation above a set average critically affected crop yields.

If such declines take place, they would reverberate globally, as many developing countries depend on food exports from the United States.

Schlenker and Roberts say that finding the correct relationship between weather and yields for major crops is a critical first step before more elaborate models can be used to examine how crop-planting choices, food and fiber supply, and prices will ultimately shift in response to climate change. According to their study, under the current climate forecasts, the best strategy for adapting would be to develop more heat-resistant crops.

Strikingly, the researchers found that the southern United States exhibit the same sensitivity to heat as places further north. “This is troublesome, as one would have expected to learn from farmers in the warmer south how to deal with hotter temperatures, but we found no evidence that they did,” said Schlenker. He and Roberts say that future research should focus on examining more closely how crops’ heat tolerance evolves over time.

“While crop yields depend on a variety of factors, extreme heat is the best predictor of yields,” said Roberts. “There hasn’t been much research on what happens to crop yields over certain temperature thresholds, but this study shows that temperature extremes are not good.”

Other research has suggested that in some case, increasing levels of manmade carbon dioxide in the air—the main culprit in ongoing warming—might actually increase growth in plants, which use the CO2 in photosynthesis. However, the direct effect of CO2 on plant growth is still being debated, and the researchers did not account for it in their analysis.