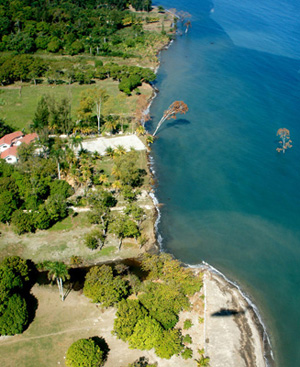 Slump in the coastline, near where a tsunami killed seven people. Scientists want to know what caused the tsunami.
(Roger Bilham, U of Colorado)

This week U.S. and Haitian scientists will start a 20-day research cruise off Haiti to address urgent questions about the workings of the great Jan. 12 earthquake, and the possibility of continuing threats. They hope to gather sonar images, sediments and other evidence from the seafloor that might reveal hidden structures, how they have moved, and where strain may be building now. Powerful aftershocks  have continued to rattle Haiti and nearby countries, but scientists know little about the potential for further big events and where they may strike; among other things, the team wants to investigate why a small, little-reported tsunami struck the coast during the quake.

"It’s important to go now, because we need to characterize what happened on the seafloor and in the subsurface before storms and waves wipe out the evidence," said chief scientist Cecilia McHugh, a marine geologist at Columbia University’s Lamont-Doherty Earth Observatory and professor at Queens College in New York. "Figuring out how this earthquake worked and where other earthquakes may be prone to occur is critical for a lot of things, including where to resettle people, where to build houses, and how strong to build them." The expedition, funded by the U.S. National Science Foundation, is being organized by Lamont-Doherty scientists, with participation from researchers at the Haitian Bureau of Mines and the University of Haiti, and the universities of Missouri, Texas, California and Rhode Island. 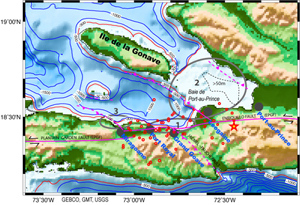 Areas to be studied (grey circles). Red star is epicenter of Jan. 12 quake; red dots are aftershocks, suggesting an unmapped fault. At circled area 1, the main fault runs offshore, near where a tsunami hit. Area 2 is a basin that may contain sediments recording past earthquakes. In area 3, strain along the main fault may have been transferred westward to what is thought to be a still unruptured section of the fault.
(Lamont-Doherty Earth Observatory)

The Jan. 12 quake took place along the east-to-west running Enriquillo Fault, a giant "strike-slip" structure, where two pieces of earth’s crust slide by each other in opposite directions.  After a big slip, stress is usually transferred to nearby areas as the earth rearranges itself, so there is a heightened risk of more events. Such aftershocks become less frequent with time, but powerful ones can pop up weeks, months or years later. Those following the Jan. 12 quake have been particularly vigorous; around 60 have rattled the region, sometimes causing more deaths. History shows a small but distinct possibility that another quake as big as the first could hit; two known comparable quakes hit the region just a month apart, on Oct. 18, and Nov. 21, 1751. A recent U.S. Geological Survey announcement and open file report suggests that strain has built on adjacent parts of the Enriquillo--but researchers say more data is needed from the seafloor to understand where dangers may collect, and they suspect that a complex of still-unmapped interlocking additional structures may complicate things.

One target is just west of the capital city of Port-au-Prince, around the coastal village of Grand Goâve and the Léogâne River delta, where the main fault leaves land and runs offshore. Here, radar images, aerial photography and corals suddenly stranded above sea level show that part of the coast was thrust up as much as a foot and a half during the quake, while adjoining areas dropped. At the same time, a small tsunami killed seven area people, and sent minor waves rolling toward other Caribbean nations. Most of the quake’s aftershocks have clustered around here as well—not along the main east-west fault, but rather in a northeast-southwest trend, much of it offshore.  Lamont-Doherty seismologist Leonardo Seeber, who will be on the cruise, said that the aftershock pattern, the up-and-down movment and the tsunami all suggest the presence of an unmapped fault or fault system,  cutting obliquely across the main fault. Strike-slip earthquakes do not normally cause tsunamis, but thrust fault do, because they displace water upward. This one, if it exists, may be capable of causing more tsunamis or complicating the picture of where strain could build, said Seeber. An alternative hypothesis regarding the tsunami is that the big quake shook sediments down the steep slope near shore, causing an underwater landslide. Tsunamis accompanied the 1751 earthquakes, and quakes in 1769 and 1842, but little more is known. Samples and images gathered by the ship should clarify the tsunami mechanism; show how much faults ruptured offshore recently and in the past; and suggest where strain might be building now. 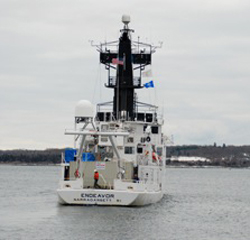 The cruise will be done aboard the R/V Endeavor, which is owned by the NSF and operated by the University of Rhode Island. The vessel will carry a variety of high- and low-frequency sonars that can both map seabottom topography in fine detail, and show cross sections of any disturbances in about the first 50 meters of sediment. Researchers expect these images to show recently formed scarps, slumps, eruptions of gas pockets and other features that would signal what happened during the quake, and what kinds of structures might lie underneath. McHugh said it was urgent that the features be studied before waves from the coming spring rainy season and summer hurricanes erase them from the shallow near-coast bottoms where the Endeavor will work. The team will also scrape up samples of shallow sediments and drill out cores of deeper sediments, where visible disturbances should provide a record of ancient quakes, as well as the most recent one.

The expedition will work closely with an onshore team led by Dr. Paul Mann of the University of Texas, Austin, an expert on the Enriquillo fault who has been working with other scientists to investigate the areas of upraised corals and related features.  Well before the quake, Mann and others had warned that strain was probably building in the region. However, “understanding of the processes at work so far has been based on some very simple models,” said Leonardo Seeber. “The estimates will be vastly improved when we get a better idea of the faults’ structure, how they move, and how they affect each other. It’s important for the country to get hold of this knowledge, because they need to plan.”

With rainy season coming on and so many people still displaced, landslides abetted by weaknesses from shaking, and lubricated by moisture may present special danger. According to analysis by the Earth Institute’s International Institute for Climate and Society, this year’s weather trends could presage a rainier than usual spring. Scientists at other parts of the Earth Institute are working with the United Nations Environment Program and other agencies on several other programs to improve short-term relief and long-term planning. These include initiatives to bring in fertilizer and seed for the coming growing season; replace rain gauges and other hardware lost in the quake; and a long-term project to restore watersheds damaged by many years of deforestation and overuse.

The Endeavor will depart from Port Everglades, Fla., on Feb. 24 and work off Port-au-Prince and points west from Feb. 27-March 12, returning to Florida on March 15. Before starting the survey, the ship plans to deliver 50 large tents that can be used as classrooms, donated by the children’s charity Plan USA, loaded at the ship’s home port at the University of Rhode Island. Co-chief scientists on the cruise are Milene Cormier of the University of Missouri, and Sean Gulick of the University of Texas, Austin.