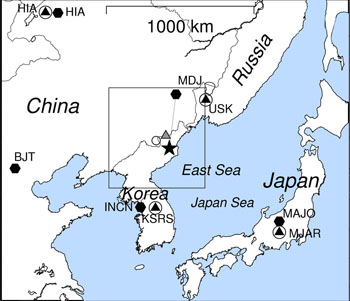 Seismologists who have intensively studied North Korea’s nuclear testing efforts say Monday’s blast was certainly a nuclear bomb, roughly five times larger than the country’s first test in 2006. The scientists, at Columbia University’s Lamont-Doherty Earth Observatory, say signals picked up by seismic stations including one in China close by, showed clear characteristics of a shallow underground nuclear explosion, with a force of probably several kilotons.

“The second test appears to have a significantly higher yield,” said seismologist Paul G. Richards, a longtime expert on seismic detection of nuclear tests. He and his colleague Won-Young Kim, also at Lamont, are coauthors of articles on the 2006 North Korean test in Nature Physics and Eos Transactions, and have a piece on current advances in nuclear-test detection in the March 2009 Scientific American.

Reports so far have given varying estimate of the explosion’s size, and many suggest that only eventual leakage of radioactive particles into the air will confirm that the explosion was nuclear, not chemical. The assessment by Richards and Kim is in line with an anonymous Obama administration official who told The New York Times shortly afterward that it was a nuclear blast of “several kilotons.” 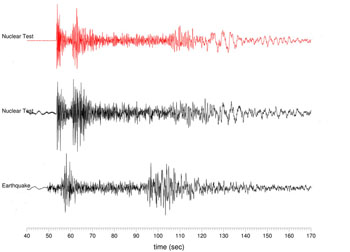 The seismic pattern produced by the latest blast was nearly identical to the Oct. 9, 2006, North Korean test, which later leaked radioactive particles. “The seismogram is almost a carbon copy of the previous image,” said Kim. Seismograms show two sudden, sharp jolts, followed by an angry buzzing of the earth. The dominant seismic waves produced were fast-traveling compressional, or P-waves, which alternately compress and dilate the ground outward from the source--the signature of an explosion. Earthquakes, by comparison, usually start out with weaker P-waves, and produce more shear waves, which shake the ground sideways in relation to their direction of travel. Kim said analysis of signals collected by different stations located the explosion in the same mountainous test area where the last test took place, some 40 kilometers northwest of the city of Kilju.

Richards said it was “implausible” that the blast, which produced shaking equivalent to an earthquake of magnitude 4.5 to 4.7, could have been made by surreptitiously planted conventional explosives. The explosion’s size cannot be exactly quantified because seismic measurements are influenced by the depth of the explosion, and the type of material in which it takes place. Geologic  maps show that the surrounding area is made of hard granite and other rocks that transmit energy efficiently, but no one except the North Koreans knows the depth of the blast, nor whether it was in direct contact with bedrock. Kim put the blast in the range of 2.2 to 4 kilotons (a kiloton is equal to 1,000 tons of TNT). By comparison, the 2006 test was estimated to be less than a kiloton, and was considered by many to be only a partial success that did not completely detonate.

Other estimates of the current test have ranged widely. The Russian Defense Ministry said it might have yielded 15 or 20 kilotons—the size of the bombs that leveled Hiroshima and Nagasaki—while European scientists have estimated three to eight kilotons.  However, some of these other estimates were made using data from stations far from the source, or which did not have readings from the 2006 event to use as a baseline. Richards and Kim took data only from a handful of stations that monitored the 2006 test, as well as earlier known chemical explosions and natural earthquakes in the same area that could be used for comparison. This included readings from the closest station from which data is available, in Mudanjiang, China, some 370 kilometers north of the test site. Much Chinese seismic data is unavailable to other countries, but Mudanjiang, operated with the U.S. Geological Survey and an international consortium of universities, transmits readings to researchers worldwide almost in real time. Kim and Richards also obtained information on signals from stations in South Korea, Australia, Alaska and Kyrgyzstan.  Each showed amplitudes three to seven times higher than in 2006, leading to the conclusion that the new test had a yield roughly five times larger than the previous one.

By any account, the latest test blast was small compared with bombs now stocked by major countries including the United States. These may yield hundreds of kilotons, with some reaching a megaton (equal to a million tons) or more. But, said Richards, “Even the 2006 North Korean test would have been a disaster if it had gone off in a metropolitan area. This one was bigger than that.”