Southern Glaciers Grow Out of Step With North 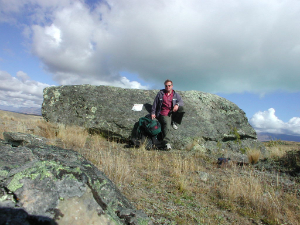 The vast majority of the world’s glaciers are retreating as the planet gets warmer. But a few, including ones south of the equator, in South America and New Zealand, are inching forward.

A new study in the journal Science puts this enigma in perspective; for the last 7,000 years New Zealand’s largest glaciers have often moved out of step with glaciers in the northern hemisphere, pointing to strong regional variations in climate.

Conventional wisdom holds that climate during the era of human civilization has been relatively stable, but the new study is the latest to challenge this view, by showing that New Zealand’s glaciers have gone through rapid periods of growth and decline during the current interglacial period known as the Holocene.

“New Zealand’s mountain glaciers have fluctuated frequently over the last 7,000 years and glacial advances have become slightly smaller through time,” said lead author Joerg Schaefer, a geochemist at Columbia University’s Lamont-Doherty Earth Observatory.  “This pattern differs in important ways from the northern hemisphere glaciers. The door is open now towards a global map of Holocene glacier fluctuations and how climate variations during this period impacted human civilizations.”

Glaciers are extremely sensitive to changes in temperature and snowfall, which makes them well suited for studying past climate. This archive has been largely untapped, however, because of the difficulty in assigning precise ages to glacier fluctuations.

One way to measure glacial fluxes is by studying the moraines, or rock deposits that glaciers often leave behind at their maximum points of advance. However, until now the methods of dating such moraines, including radiocarbon dating of organic matter, could be off by hundreds of years. By refining the analysis of a method called cosmogenic dating, Schaefer and his colleagues were able for the first time to assign precise ages to young Holocene moraines. They did this by measuring minute levels of the chemical isotope beryllium 10 in the rocks, which is produced when cosmic rays strike rock surfaces, and builds up over time. The researchers were thus able to pinpoint exactly when glaciers in New Zealand’s Southern Alps began to recede, exposing the rocks to the cosmic rays.

From the results, they constructed a glacial timeline for the past 7,000 years and compared it against historic records from the Swiss Alps and other places north of the equator.

They found that the glaciers around Mount Cook, New Zealand’s highest peak, reached their largest extent in the past 7,000 years about 6,500 years ago, when the Swiss Alps and Scandinavia were relatively warm. That’s about 6,000 years before northern glaciers hit their Holocene peak during the Little Ice Age, between 1300 and 1860 AD.

That finding was a surprise to some scientists who assumed that the northern cold phase happened globally. The record in New Zealand shows other disparities that point to regional climate variations in both hemispheres, including glacial peaks during classic northern warm intervals such as the Medieval Warm Period and the Roman Age Optimum.

The new chemical and analytical protocols developed in Schaefer’s cosmogenic dating lab is expected to allow scientists to accurately date glacier fluctuations throughout the Holocene, rounding out the climate picture on the continents.

“With this measure we can go to almost any mountain range on earth and date the moraines in front of the glaciers and produce a similar chronology,” said coauthor George Denton, a glaciologist who is a senior professor at the University of Maine and an adjunct scientist at Lamont-Doherty.

Overall, glaciers around the world have been declining since about 1860, with the exception of a brief advance in Switzerland in the 1980s, New Zealand in the late 1970s through today, and a few other places. Changes in wind and sea surface temperatures are thought to be causing these regional fluctuations. Currently in a wet phase, New Zealand is expected to swing back to a warmer, drier phase in the next few years, causing the glaciers to retreat once again.

“The application of this technique should allow for much more accurate reconstructions of glacial advances worldwide,” says Paul Filmer, program director for the National Science Foundation (NSF)'s Division of Earth Sciences, which helped fund the study.  “This would provide more constraints to allow us to make our climate models more accurate.”