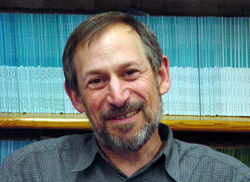 Mark Cane has never been one to follow the status quo. After studying pure mathematics and what is now known as computer science at Harvard in the 60s, he took a hiatus from academia to work in New York and explore his roots in the Lower East Side. Little did he know that several decades later there would be a Mark Cane, world-renowned climatologist, in the headlines of the New York Times for groundbreaking forecasting models that would help millions of people around the world.

Today Cane’s resume is a bit longer. He is G. Unger Vetlesen Professor of Earth and Climate Sciences at Columbia’s Lamont-Doherty Earth Observatory (LDEO) and a professor of earth and environmental sciences and applied physics and applied mathematics. He also is director of the M.A. Program in Climate and Society in the Department of Earth and Environmental Sciences. He is an active member of the Earth Institute’s academic committee and is on the executive committee for the Earth Institute’s NSF-funded ADVANCE program, which seeks to increase the participation and advancement of women scientists and engineers at the University through institutional transformation.

Cane has been a leader for over three decades in his areas of focus: tropical oceanography, climate modeling, paleoclimate, impacts of climate on society, El Niño and the Southern Oscillation (ENSO) forecasting, and data analysis methodology. In a career filled with illustrious highlights, Cane is perhaps most notably recognized in the international scientific community for the first-ever ENSO-predicting computer model that he developed in collaboration with his student and future Earth Institute colleague, Steve Zebiak, who is now director of the Earth Institute’s International Research Institute for Climate and Society. To the surprise and astonishment of many, this model successfully made the first physical forecasts of El Niño in 1985. This El Niño forecasting breakthrough was an amazing accomplishment for a young professor – especially one who spent much of his twenties volunteering in the civil rights movement, listening to jazz in the East Village, and protesting against the war in Vietnam.

After deciding to re-dedicate his life to science and return to academia to study with the famous and charismatic weather research pioneer Jule Charney at MIT, Cane began an unlikely path to social activism on a much larger scale. By developing his short-term climate-predicting models, Cane has been able to help millions of people feed themselves and their families by better preparing for droughts and other climate fluctuations like changing ocean temperatures that can profoundly affect fishing and agriculture.

At LDEO, Cane has headed research in a number of climate-related topics, including the sensitivity of persistence characteristics of atmospheric climate regimes; mechanisms of abrupt climate change, which combines paleoclimate research with modern numerical modeling and ocean observations to understand the processes of past and future climate change; and seasonal and interannual forecasting. He describes the evolution of his career like this:

“I was lucky enough to work on the tropical oceans in the era when we came to understand and predict El Niño and the Southern Oscillation (ENSO), the now famous pattern of interannual climate variability with well-publicized global consequences. Steve Zebiak and I devised the first numerical model able to simulate ENSO, and in 1985 we used this model to make the first physically based forecasts of El Niño. Over the years the Zebiak-Cane model has been the primary tool used by many investigators to enhance understanding of ENSO.

“Making predictions led to asking what to do with them. So I began to work on the impact of El Niño and other climate variability on human activity, especially agriculture and health. My 1994 paper on the strong effect of El Niño on the maize crop in Zimbabwe has been influential in prompting decision makers to consider climate variability [when drafting policy]. This line of inquiry led to the creation of the International Research Institute for Climate and Society, housed here at Lamont.

“While I continue to work on numerical models, equatorial dynamics, El Niño, prediction of climate variations and climate impacts, and global climate issues, my main interests at present are explaining the variations in the paleoclimate record, especially the astoundingly strong abrupt changes and the succession of droughts over the past millennium.”