A wizardly improviser who guided sub warfare and charting of depths

J. Lamar Worzel, a pioneering geophysicist and engineer who helped shape human understanding of how sound travels through the oceans and who cofounded Columbia University’s Lamont-Doherty Earth Observatory, died Dec. 26. He was 89. He was struck suddenly by a heart attack at his home in Wilmington, N.C., said his son, Howard Worzel, who announced his death.

A frequent sailor in submarines and ships, Worzel improvised complex new measuring instruments out of spare parts and household objects in the 1930s, a time when scientists had only primitive concepts of deep marine seabeds, currents and acoustics. He and colleagues investigated the makeup of sediments in the Atlantic by exploding homemade bombs in the depths and reading the echoes. Their discoveries helped World War II submarines elude enemies, guided Cold War sub detection, and provided tools for charting earth’s crust and climate.

It was Worzel’s longtime boss at Lamont-Doherty, William Maurice Ewing, whose seminal ideas drove early systematic mapping of the world’s oceans in the 20th century. But it was Worzel’s energy and ingenuity that brought many ventures to fruition, said Dennis Hayes, a Lamont oceanographer who worked under both men.

John Lamar Worzel was born on Feb. 21, 1919, in Staten Island, N.Y., where his father was a real-estate lawyer. Ignoring his given name, his family called him “Lamar,” and scientists called him “Joe”—the latter, after he and fellow physics students at Lehigh University adopted a 1937 pop song that went, “What do you know Joe? We don’t know nothing.”  Ewing, then a professor at Lehigh, took a small gang of undergrads to sea, and Worzel soon became a star.

Working first out of Massachusetts’ Woods Hole Oceanographic Institution, Worzel and others built instruments that did not yet exist: a camera for snapping photos thousands of feet below the surface, with a coffee-can lid for a flash reflector and a thick diner-style drinking glass for casing; a seismograph that employed a modified Hamilton railroad watch; an oscillograph pushed by a motor from a toy electric train. In order to detonate explosions under deep-sea pressures up to 8,000 pounds per square inch—presumed impossible by experts--Worzel carefully packed explosives into inner tubes, then figured out how make them go off by adapting paper caps from toy cowboy revolvers. “We never allowed ourselves to think that anything we decided to do was impossible,” he wrote in an unpublished autobiography, completed in 2001.

On the brink of World War II, the Navy funded their work, and Worzel and Ewing quickly made fundamental discoveries. One was the existence of “shadow zones”—underwater regions defined by specific combinations of temperature and pressure, in which sounds from the surface—say, a ship’s sonar—refused to travel. With this information, Worzel coauthored a manual that enabled many a World War II sub commander to hide from deadly enemy ships above. Conversely, they identified the “deep sound channel”-- a narrow horizontal zone about 3,000 feet down that transmits low-frequency sounds thousands of miles with fantastic clarity, like a natural telephone line. They showed they could blow up a few pounds of TNT off South America, and pinpoint the source on the deep channel from as far off as West Africa. This discovery became the basis of the Navy’s vast Cold War SOFAR (sound fixing and ranging) program and its successors—secret weapons that girded the world with underwater listening devices to identify and track Soviet subs by their engine noise. After the nuclear-powered sub USS Thresher mysteriously disappeared in 1963, an acoustic investigation marshaled in large part by Worzel helped locate the remains, 8,400 feet down off New England. For this, he received a Navy Meritorious Public Service Citation. 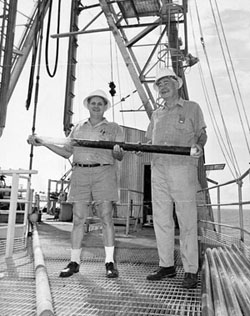 In 1948, Ewing and a handful of his grad students including Worzel moved to Columbia University and founded Lamont Geological Observatory (later renamed Lamont-Doherty Earth Observatory). Then Columbia president Dwight Eisenhower lured them by agreeing to let them use a Hudson riverfront estate in Palisades, N.Y., newly donated by the Lamont family. Ewing became director and Worzel, deputy. Worzel and his wife lived on the expansive grounds and eventually raised four children there. Frequently covered head to foot in grease from working on machinery, he was occasionally mistaken by visitors as one of the maintenance staff.

Starting in the early 1950s, Worzel arranged to obtain a series of research vessels—the first, a modest schooner powered partly by sail--that crisscrossed the oceans on a wide variety of missions. These made Lamont a global powerhouse in marine research. Worzel perfected a system to efficiently remove cores of sediment from depths of over 12,000 feet, and the institution assembled the world’s largest collection of such samples. He initiated the use of satellite navigation in research ships. One of his most important advances was his design of a system that could take precise measurements of earth’s gravity field from surface vessels; because constant rolling and pitching on ships upset readings of previous instruments, up to now it had been possible to take the scientifically vital readings only in the still depths inhabited by subs. Worzel and his colleagues helped site the Hudson River’s Tappan Zee Bridge by mapping the riverbed’s structure with seismic signals.

Worzel’s unstoppable drive and uncanny mechanical knack sometimes infuriated others. One night at Woods Hole, about to depart for sea lacking some basic hand tools, he broke down the door of a colleague’s workshop with a fire axe, and helped himself. More than once, he walked up to a technician who had been trying for days to fix a piece of broken equipment, made the gadget work in a few minutes, then walked away. “He got to be known as a cocky, and sometimes grumpy character,” said Hayes. “But that was just a surface effect he liked to present. He was very generous--a really good guy, and an outstanding scientist.”

In the late 1960s, violent student protests against the Vietnam War forced many universities, including Columbia, to halt secret military work. Worzel felt that “as citizens of our country, if we had skills that were of use … it was our duty to make them available,” so he and colleagues founded a nonprofit corporation, the Palisades Geophysical Institute, which continued classified Navy work outside of Lamont. Simultaneously, he kept his academic posts. Worzel served as the corporation’s president over three decades.

In 1972, Worzel and Ewing left Columbia together, for the University of Texas, Austin. When Ewing died two years later, Worzel succeeded him as director of the university’s Institute of Geophysics. He retired in 1979.

Although much of Worzel’s work originated with the military, he and others pursued it for many peaceable uses. Pictures from the early deepwater cameras were the first to overturn the notion that ocean abysses were lifeless. Thousands of gravity measurements conveniently taken from surface ships helped chart the deep crustal structure of the earth, including features like continental margins. These measurements eventually helped prove the overarching modern theory of plate tectonics that control the surface of the earth—which Worzel for a time pooh-poohed, until confronted with growing evidence compiled in part using his own techniques. Much of the Navy’s surveillance technology was declassified in the 1990s; acoustic techniques have since been used to study ocean biology, underwater earthquakes and volcanoes, and to find archeological artifacts. Since sound travels faster or slower in water depending on its temperature, techniques pioneered by Worzel and his coworkers have also proved key in studying the oceans’ interaction with climate.

In 1967, Worzel and his Lamont friend Robert Gerard coauthored a paper in the journal Science proposing a green energy scheme with a distinctly 21st-century outlook. They proposed that tropical nations use windmills to pump chilly water from the ocean deeps into giant containers along shore. Brushed by warm, humid breezes, the containers would act like iced-tea glasses on a summer day, condensing copious fresh water on their surfaces, for drinking and farming. The nutrient-rich ocean water would be recycled to feed aquaculture lagoons.

In 2002 the Palisades Geophysical Institute decided to disband, when Worzel and others felt its basic research was being applied too directly to weaponry. Its carefully husbanded surpluses, built up over the years, were used to endow at least $10 million in professorships and grants for young geoscientists at Columbia, Woods Hole, the universities of Texas and Memphis, and the National Academy of Sciences.

Worzel retired to Wilmington, N.C., but was active to his last moments, said Howard Worzel; among other things, he was studying string theory. In addition to Howard, a retired photographic scientist in Phoenix, Ariz., Worzel is survived by his wife of 67 years, the former Dorothy Crary; daughter Sandra Lee Browne, a business owner in Toronto; son William, who runs a biotechnology company in Ann Arbor, Mich.; eight grandchildren; and two great-grandchildren.