Rocks Could Be Harnessed to Sponge Vast Amounts of Carbon Dioxide from Air, Say Researchers 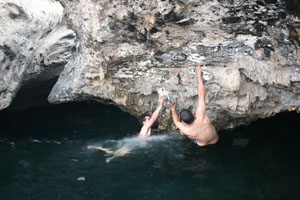 Scientists say that a type of rock found at or near the surface in the Mideast nation of Oman and other areas around the world could be harnessed to soak up huge quantities of globe-warming carbon dioxide. Their studies show that the rock, known as peridotite, reacts naturally at surprisingly  high rates with CO2 to form solid minerals—and that the  process could be speeded a million times or more with simple drilling and injection methods. The study appears in this week’s early edition of the Proceedings of the National Academy of Sciences.

Peridotite comprises most or all of the rock in the mantle, which undergirds earth’s crust. It starts some 20 kilometers or more down, but occasionally pieces are exhumed when tectonic plates collide and push the mantle rock to the surface, as in Oman. Geologists already knew that once exposed to air, the rock can react quickly with CO2, forming a solid carbonate like limestone or marble. However, schemes to transport it to power plants, grind it and combine it with smokestack gases have been seen as too costly and energy intensive. The researchers say that the discovery of previously unknown high rates of reaction underground means CO2 could be sent there artificially, at far less expense.  “This method would afford a low-cost, safe and permanent method to capture and store atmospheric CO2,” said the lead author, geologist Peter Kelemen. 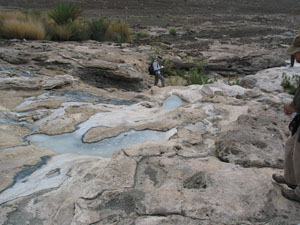 Kelemen and geochemist Juerg Matter, both at Columbia University’s Lamont-Doherty Earth Observatory, made the discovery during field work in the Omani desert, where they have worked for years. Their study area, a Massachusetts-size expanse of largely bare, exposed peridotite, is crisscrossed on the surface with terraces, veins and other formations of whitish carbonate minerals, formed rapidly in recent times when minerals in the rock reacted with CO2-laden air or water. Up to 10 times more carbonates lie in veins belowground; but the subterranean veins were previously thought to be formed by processes unconnected to the atmosphere, and to be nearly as old as the 96-million-year-old rock itself. However, using conventional carbon isotope dating, Kelemen and Matter showed that the underground veins are also quite young— 26,000 years on average—and are still actively forming as CO2-rich groundwater percolates downward. Many underground samples were conveniently exposed in newly constructed road cuts. All told, Kelemen and Matter estimate that the Omani peridotite is naturally absorbing 10,000 to 100,000 tons of carbon a year--far more than anyone had thought. Similarly large exposures of peridotite are known on the Pacific islands of Papua New Guinea and Caledonia, and along the coasts of Greece and the former Yugoslavia; smaller deposits occur in the western United States and many other places.

The scientists say that the process of locking up carbon in the rocks could be speeded 100,000 times or more simply by boring down and injecting heated water containing pressurized CO2. Once jump-started in this way, the reaction would naturally generate heat—and that heat would in turn hasten the reaction, fracturing large volumes of rock, exposing it to reaction with still more CO2-rich solution. Heat generated by the earth itself also would help, since the further down you go, the higher the temperature. (The exposed Omani peridotite extends down some 5 kilometers.) The scientists say that such a chain reaction would need little energy input after it was started. Accounting for engineering challenges and other imperfections, they assert that Oman alone could probably absorb some 4 billion tons of atmospheric carbon a year—a substantial part of the 30 billion sent into the atmosphere by humans, mainly through burning of fuels. With large amounts of new solids forming underground, cracking and expansion would generate micro-earthquakes—but not enough to be readily perceptible to humans, says Kelemen. 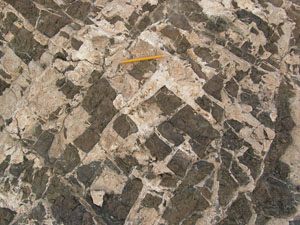 “It’s fortunate that we have these kinds of rocks in the Gulf region,” said Matter. Much of the world’s oil and gas is produced there, and Oman is constructing new gas-fired electric plants that could become large sources of CO2 could be pumped down.  According to the scientists, Petroleum Development Oman, the state oil company, is interested in a pilot program. Kelemen and Matter have filed a preliminary patent application on the technique.

Matter has been working on a separate project in Iceland, where a different kind of rock, volcanic basalt, also shows promise for absorbing CO2 produced by power plants. Trials there are set to begin in spring 2009, in partnership with Reykjavik Energy, and the universities of Iceland and Toulouse (France).

Kelemen said:  “We see this as just one of a whole suite of methods to trap carbon. It’s a big mistake to think that we should be searching for one thing that will take care of it all.”