Is the Hudson Swimmable? New Program Aims to Test the Waters

Ongoing Work By Scientists Will Supply Data to the Public 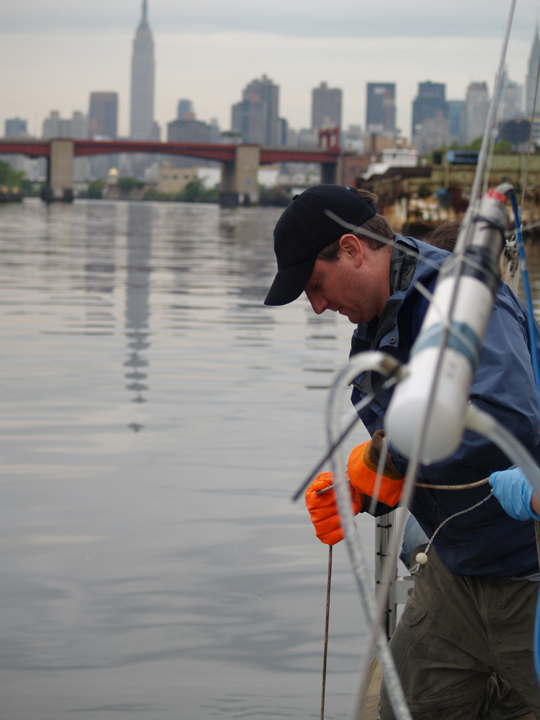 A frequently asked question around New York is: “Is it safe to swim? This has spurred Columbia University’s Lamont-Doherty Earth Observatory and the regional nonprofit organization Riverkeeper to carry out a joint study of water quality in the Hudson River. The program is the first to regularly test the water from New York Harbor to the river’s upper reaches, and to make the data available quickly to the public. It is aimed at pinpointing the processes that affect water quality, supplying government with sound science, and, ultimately, helping protect the public.

Since the passage of the Clean Water Act in 1972, water quality in most of the nation’s rivers has improved greatly, including in the Hudson. With the perception that the river is cleaner, people are now using it for recreation in growing numbers. However, parts of the river and its tributaries are still sometimes impaired by discharges of raw sewage from aging wastewater treatment systems. Information on fast-changing water quality is not easily accessible, coordinated or timely enough to help the public determine when or where it is safe to enter.

“If someone is going to decide whether to send their child in the water, we need more information, and we should demand more information,” said Lamont-Doherty research scientist Greg O’Mullan, who is helping lead the research along with Lamont scientists Andrew Juhl and Raymond N. Sambrotto. “We are trying to provide the link between academic science and practical action.” 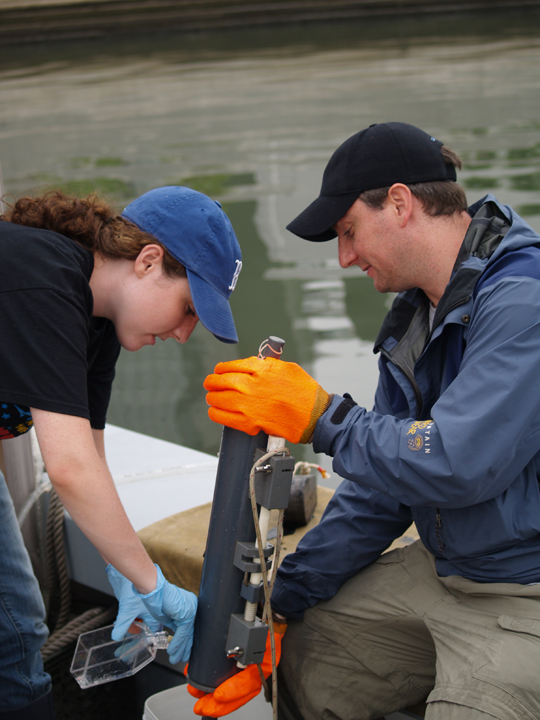 Processing a sample with Lamont-Doherty summer intern Liz Suter. In most places gloves “protect the samples from me, but in Newtown Creek, they’re to protect me from the samples,” O’Mullan told The New York Times

At a riverside press conference in midtown Manhattan held to announce the research, Lamont director G. Michael Purdy called the Hudson “an iconic example” of the nation’s neglected river systems. He called for accelerated fundamental research to understand how such systems work, and to help drive policy decisions.

“The Hudson has returned to being the recreational resource it once was, and now needs to be managed accordingly,” said Alex Matthiessen, president of Riverkeeper. “The program makes available to the public current water quality data that will help individuals make informed decisions. However, the variable water quality found in our initial data demonstrates the need for local and state agencies to step up their testing and establish a system for timely public notification.”

Using Riverkeeper patrol boat, in 2006 and 2007, O’Mullan and colleagues did a pilot study, sampling water at 27 sites from New York Harbor to Peekskill, about 40 miles upriver. They measured the sewage-indicating bacterium Enteroccocus, as well as salinity, oxygen, temperature, turbidity, and chlorophyll.  In May 2008, with funding from the Wallace Foundation, the program added 40 sampling sites, extending from the harbor up to Waterford, some 150 miles north. The initial report, plus continually updated data, will be found at Riverkeeper’s Swimmable River web pages.

For now, most sites will be monitored once a month.  While not yet at the stage where it can be used as a direct guide to swimming on any particular day, the program has revealed extreme and surprising variability, based on location and weather conditions. In particular, sewer overflows, often triggered by wet weather events, can send unsafe amounts of pathogens into waterways. The findings highlight a number of concerns:

The findings highlight a number of concerns:

Unfortunately, there does not appear to be a simple relationship between rainfall and counts of sewage-indicating bacteria, said O’Mullan. Some areas may meet guidelines for safe swimming a day or two after rain, while others can take substantially longer, especially after heavy rainfall. “We need to identify the problems and understand the causes before we can enact decision that will return the whole river to a swimmable condition,” he said. “This will require new approaches to monitoring and management, including increased cooperation between public, private, and academic institutions.” According to both O’Mullan and Matthiessen, there will also have to be a renewed focus on upgraded sewage treatment infrastructure, water quality monitoring, and public notification of water conditions.