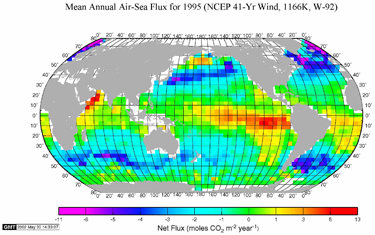 Punta Arenas, Chile, Feb. 28, 2008—Scientists will embark today from this port on the tip of South America to spend 42 days amid the high winds and big waves of the Southern Ocean, where they will make groundbreaking measurements to explain how large amounts of climate-affecting gases move between atmosphere and sea, and vice-versa.

The cruise should provide important information on factors controlling the flux of the greenhouse gas carbon dioxide between the ocean and atmosphere, said the cruise’s chief scientist, David Ho of Columbia University’s Lamont-Doherty Earth Observatory. Comprising 30 percent of the surface area of global seas, “the Southern Ocean is a source of great uncertainty,” he said. “So it’s potentially important to our understanding of the global system.” 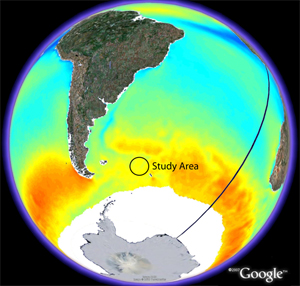 Humans currently put about 8 billion metric tons of CO2 into the atmosphere each year, mainly by fossil-fuel burning and deforestation. About a quarter is thought to be absorbed by the world's oceans, and a quarter by plants or other components of land. The rest stays in the air—much of the reason why atmospheric CO2 is now increasing and climate is warming. However, there are huge uncertainties in the calculations—made so far mostly through indirect means--and fluxes seem highly variable from year to year, with some parts of the oceans habitually giving up CO2 while others absorb it. (The Southern Ocean usually absorbs it.) "Understanding how atmospheric carbon dioxide reacts with these cold surface waters is important for determining how the ocean uptake of carbon dioxide will respond to future climate change,” said Christopher Sabine, an oceanographer at the U.S. National Oceanic and Atmospheric Administration (NOAA). NOAA, NASA and the National Science Foundation are cosponsoring the cruise.

About 30 scientists from over a dozen institutions will focus their study on an area in the western Atlantic sector of the Southern Ocean, more than 1,000 miles east of Punta Arenas, aboard the 274-foot NOAA ship Ronald Brown. Here high, freezing winds unimpeded by landmasses roar much of the time, and waves can routinely top 30 feet. “The conditions are a little grim, but it’s ideal for study,” said Ho. He said that higher wind speeds correlate with faster exchange of gases, but there have been few studies aimed at directly measuring these exchanges under real-world conditions. The scientists say that wind itself does not drive gas exchange; the drivers are hard-to-observe phenomena driven by the wind, including turbulence and bubbles created by breaking waves. To examine these mechanisms, the scientists will dangle arrays of sophisticated instruments just above the water surface, and in the water column. “That will be a challenge, since the bow will be plunging off those big waves,” noted Sabine.

Another part of the team will measure the amount of phytoplankton in the water; by looking at optical properties such as ocean color, which is an indication of chlorophyll content. Phytoplankton takes up carbon during photosynthesis, and thus can influence surface ocean CO2concentrations. “NASA’s ongoing effort to understand the global carbon cycle will benefit from the data this cruise will produce,” said Paula Bontempi, manager of NASA’s ocean biology and biogeochemistry research program. "NASA's global satellite observations of ocean color will be improved, as we validate what our space-based sensors see with direct measurements taken at sea."

The expedition is officially known as the Southern Ocean Gas Exchange Experiment, or GasEx III. It follows two similar experiments: GasEx I, which was conducted in the north Atlantic in 1998; and GasEx II, in the equatorial Pacific in 2001.

In order to keep the public informed of this important mission, the scientists will be available for remote interviews, and will feed a daily blog to the expedition’s website: http://so-gasex.org.

The Earth Institute at Columbia University is the world’s leading academic center for the integrated study of the Earth, its environment and society. The Earth Institute builds upon excellence in the core disciplines—earth sciences, biological sciences, engineering, social sciences and health—and stresses cross-disciplinary approaches, while placing special emphasis on the needs of the poor. www.earth.columbia.edu

Lamont-Doherty Earth Observatory, a member of The Earth Institute, is one of the world's leading research centers seeking fundamental knowledge about the origin, evolution and future of the natural world. More than 300 research scientists study the planet from its deepest interior to the outer reaches of its atmosphere, on every continent and in every ocean. From global climate change to earthquakes, volcanoes, nonrenewable resources, environmental hazards and beyond, Observatory scientists provide a rational basis for the difficult choices facing humankind in the planet's stewardship. www.ldeo.columbia.edu.