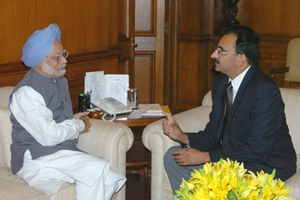 India has conferred the high Padma Shri award on senior Earth Institute economist Nirupam Bajpai for his service to the nation in literature and education. The president of India, the Honorable Pratibha Devisingh Patil, will give the award to Bajpai in March, in New Delhi.

Padma Shri is given to Indian and foreign nationals to recognize their distinguished contributions to society. Bajpai has advised national leaders, and led several research teams of social and physical scientists in the states of Tamil Nadu and Gujarat, among several others. He is currently working on a national project, “Scaling up Services in Rural India.”

Bajpai, director of the South Asia program at the Columbia University Earth Institute’s Center on Globalization and Sustainable Development, is a macroeconomist by training. His research interests include economic growth and development, information technology, and the relationships among geography, demography, and economic growth. He focuses on policy reform in India, China, and the South and East Asian regions. In India, his work is aimed primarily at the state level, with a view to achieving rapid economic growth via continued reforms that improve institutions and economic policies. His most recent work focuses on scaling up health and education services in rural India, and outsourcing of global services. Through much of his career, he has collaborated on projects with the Earth Institute’s director, Jeffrey Sachs. 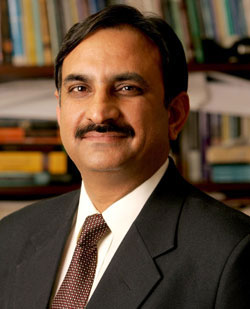 The Planning Commission of India, using Dr. Bajpai’s research for “Scaling up Services in Rural India” is working with the state governments of Madhya Pradesh, Rajasthan and Uttar Pradesh to scale up public investments in rural primary health and education. The federal government is also helping provide larger resources to the states for these sectors. On Bajpai’s advice, a pilot project to capture and sequester carbon dioxide will be put together at a coal-based thermal power plant in the state of Andhra Pradesh.

Based on Dr. Bajpai's work with Sachs, former Prime Minister Vajpayee announced major national goals for development in 2000. These included a target of doubling India’s per capita income by 2010, and ensuring that every child receives education to the eighth grade. A large number of special economic zones are now being established across several states based on their recommendations.

In 2002 the chief minister of Tamil Nadu announced several major state-level development goals based on Bajpai’s work. Along with advances in education for girls and disadvantaged groups, these included making the state a leader in information technology and manufacturing, and giving all villages electricity, a trunk road, telephone and internet connectivity, a school, clean water and sanitation, a health worker and local self government. In addition, Bajpai’s work has helped Tamil Nadu implement tax and expenditure reforms.

After earning his Ph.D. in economics in 1988, Bajpai worked at the Massachusetts Institute of Technology. In 1995 he moved to Harvard University’s Institute for International Development and later its Kennedy School of Government, where he worked with Sachs. Bajpai moved to the Earth Institute in 2002. Currently he is an associate editor of the journal Asian Economic Papers, and is on the editorial board of the journal Economic Change and Restructuring. He is the author or coauthor of numerous articles on economic reforms in developing countries, fiscal policy, and the role of trade and foreign direct investment. In 1998, he co-edited the volume India in the Era of Economic Reforms with Jeffrey Sachs and Ashutosh Varshney.