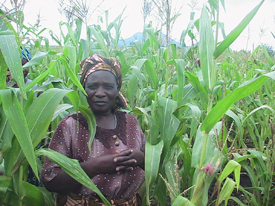 Simple interventions like adding nitrogen to depleted soil can dramatically increase crop yields for smallholder farmers such as this woman in Kasunga, Malawi.

Sustainable development is defined as "meeting the needs of the present without compromising the ability of future generations to meet their own needs." (Brundtland Commission, 1987). Global warming is an example of what happens when we do not develop sustainably.

Today, over 1 bililon people live on less than $1 a day, and life expectancy in nine African countries is less than 40 years. Meanwhile, the actions of the rich world, such as loading the atmosphere with carbon dioxide, are compromising the well-being of future generations and pushing our planet toward an uncertain future.

Ignoring the issues of sustainable development has many possible consequences, such as rising sea levels, extreme droughts, erosion and loss of forests, increases in slum populations, species extinctions and collapsing fisheries. There is also increasing evidence that issues such as water scarcity play a role in internal violence and regional conflict.

At the turn of the new millennium, the leaders of 191 nations agreed that together they have the resources and the political will to eradicate the extreme poverty, hunger and disease that kills millions of people each year in the poorest parts of the world. In 2005, the United Nations published a science-based blueprint for how these goals — called the Millennium Development Goals — can be accomplished.

However, much of the aid from donor countries remains well below their pledge of 0.7% GNP.